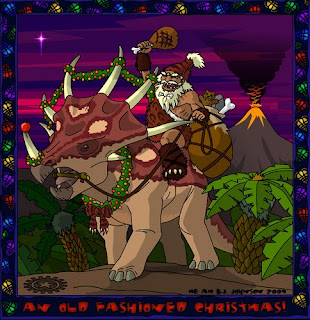 Posted by BigFella at 4:26 PM No comments:

An elf for all seasons.

I had four Warhammer elves that I wanted to add to my rotation of player character minis, so I decided to do 'em up in a "four seasons" kinda theme. That's pretty much it. I guess this kind of works as a holiday post, but these guys probably never spent much time in a workshop working with mallets and chisels or wrangling reindeer.

Here's a couple of minor magic items to toss your character's way in a Labyrinth Lord game. They were on a random equipment list from my Halloween Game, but didn't show up in play.

These two items are based on magic items from European folklore, and I'm kind of surprised they never showed up in older versions of the game. (3rd. Ed. had a Hand of Glory that was pretty much just an extra hand for magic rings. In most folklore I've read, it's supposed to be a powerful charm for thieves, and that's how I'm presenting it. (Although the idea of an armless wizard with a Hand of Glory sporting a Ring of Telekinesis is an inneresting villain concept, if y'ask me...)

Hand of Glory
This boon to thieves and dungeon delvers is a mummified hand dipped in wax and fashioned into a candle by disreputable hedge wizards and scurrilous hoodoo men. The hand may be from any humanoid creature, but the hands of human thieves hung for their crimes under a new moon are reputed to be the most efficacious.

The Hand of Glory is activated by lighting all five fingers, after which it will burn for one hour before its charm is lost. It illuminates an area similar to a torch, and its eerie light reveals any hidden doors or secret compartments it is shown upon. The user may also use this gruesome talisman to open locked doors or containers up to five times, by standing before the chosen lock and blowing out one of the fingers. Once all of the fingers have been blown out, the talisman is useless, except maybe as a back scratcher.

Mandrake Root
This palm sized, vaguely man shaped root is prized by alchemists and apothecarys for its magical properties, but members of the dungeon delving professions value it for its ability to protect them from the sapping of their souls by powerful undead.

When worn as an amulet about the neck, a mandrake root will protect the wearer from 1d3 level draining attacks, after which it crumbles into dust.

Mandrakes of the magical variety are very dangerous to harvest. If a mandrake root is pulled from the soil, it looses a scream that forces all within 20 feet to make a save vs. death or die. Over the years, adventurous harvesters have developed many clever methods for pulling the root from the ground, such as tying a hungry dog to the plant with a haunch of meat just out of its reach, and then running for the hills. Once obtained, the root must be washed with wine and kept wrapped in a clean linen towel out of the sun for a week.
Posted by BigFella at 8:39 PM 2 comments: