Yeah, I'm hideously overdue to talk about my fun times at Helgacon V. Frankly, as awesome as it was it was so long ago I can't hope to do a play by play.

So here's some eye candy from one of the events I ran, a sugary little concoction in the "gonzo" vein that stirred in influences from disparate corners of pop culture with the strongest flavors coming from Saturday Morning Cartoons, that I called "The Kingdom of Murgatroyd"

These are the pre-generated characters, of whom the players could choose either the spear or distaff versions to play. 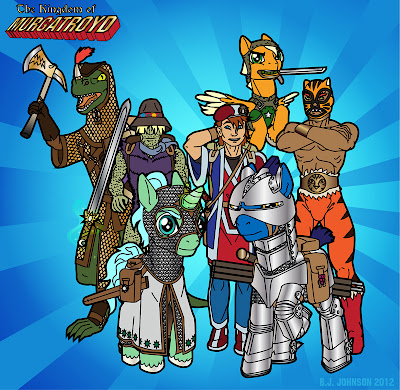 Left to Right, we have Gygasaurus the Primusaur, Mostly the Shapeshifter, Twinkle Hooves the Unicorn Pony, Bluered the Dweomon Master, Starfox the Pegasus Pony, Buckberry the Earth Pony, and El Tigre Muchacho, a mighty Handsman 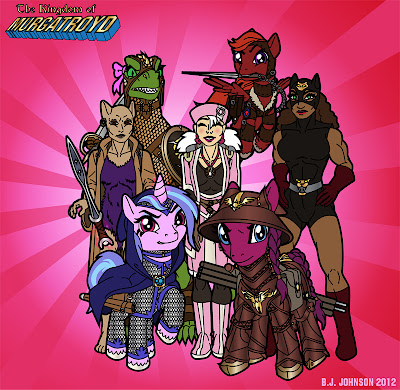 And representing the lovely ladies of adventuring, we have Galgasaurus the Priumusaur, Sorta the Shapeshifter, a Unicorn Pony known as The Fabulous Pixie, Pearl Diamond the Dweomon Master, Vixen the Pegasus Pony, Brandywine the Earth Pony, and La Pantera Muchacha, a fearless Handswoman.

Long and forgotten story short, the doughty team of heroes busted into the secret lair of the nefarious evil world domination bent organization S.K.U.L.L., beat up a lot of goons, and rescued some hapless travellers from the sinister cabal's sweaty clutches.


A good time was had by all.
Posted by BigFella at 6:12 PM No comments:

So here's my gaming bookshelf, a la Grognardia's shelf meme.

Modules, Miscellaney, and old notebooks full of game notes from back in the day, then Box Sets.