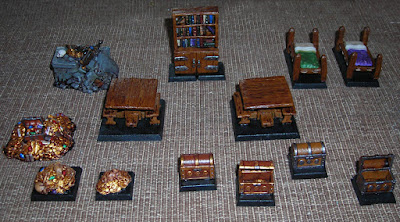 Been doin' a little recreational painting the past couple days. Nothin' too dramatic, just workin' on my backlog.

Yesterday I decided to have a go at getting a bunch of dungeon set pieces I'd accumulated painted up. The treasure piles were my most recent acquisition, gotten with the idea that I ought to have some metaphorical carrots to go with all the monsters wielding their sharp, pointy sticks. 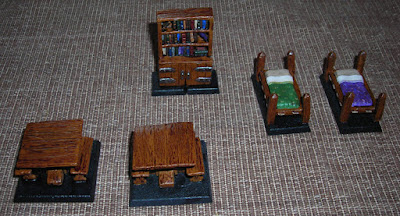 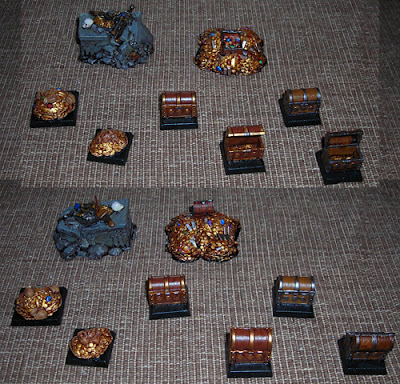 Posted by BigFella at 4:46 PM No comments: 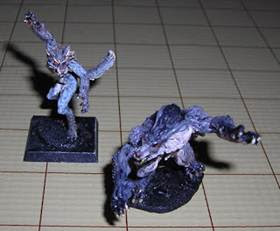 Monsters Mashed:
1 Angry, Torch Wielding Mob : Persuaded to not burn down the hunting lodge and sent home with a headless werewolf carcass
20 EXP
4 Dire Wolves: Spoken to via cleric spell. Persuaded to not bash down the improvised door and eat everybody.
280 EXP
1 Werewolf: Shot with a magic arrow, stabbed with silver dagger, and finished off via clubbing with a teapot.
200 EXP

I don't recall all too much about this session. I think it was one of those points where the party is just trying to hole up and rest to regenerate HP's and spells, but a succession of pro, semi-pro, and anti wolf factions just kept knockin' on the door. As you can see from the report, there was a lot of fast/smooth talkin' going on. Plus that teapot of Greed's wasn't left in much shape to pour tea out of. While the hapless, accursed huntsman and his frau were both sent off to the big kennel in the sky, their legacy will live on, as you shall see. Gotta remember to properly clean those wolf bites, folks... 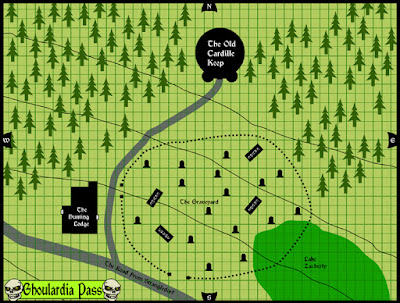 Pretty much every time I've run the Ghoulardia Pass setting the hunting lodge has been the first place that the party gravitates to. It makes sense when you think about it, though. Given the choice between a foggy, dilapidated graveyard, a dark, looming keep, and a ramshackle house with a cheery light in the window,  I guess it's a no-brainer. (It's a metaphor, Igor. Don't look so disappointed...)

Of course, the cheery light is from the carpet being on fire because the occupants of the house succumbed to lycanthropy and trashed the place, but any port in a storm, eh? If I run this in the future I might see if I can take steps to make the lodge less attractive.

Posted by BigFella at 7:51 AM No comments: 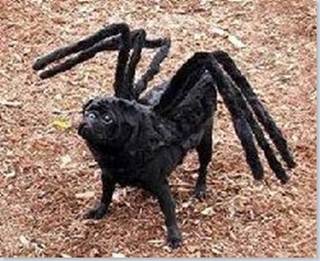 Let me know when you want to play again. I can make replacement/starting characters whenever anybody wants to stop by.

Well, let's introduce our dramatis personae, shall we? Meet Vlad Draculastein, the cowardly dampyr, Greed, a tough as nails homanculus, Arongoth of Hogendaus the sinister cleric, and Rael the scrappy thief. Rounding out the party as dumb muscle and arrow catchers are a pair of reanimated rat creatures from last session. For Arongoth, Animate Dead was a hammer, and every enemy that fell in battle was a coffin nail.

My general practice for Labyrinth Lord convention games is to start characters off with 200001 EXP, which puts 'em mostly at around Lvl 5, with certain exceptions. My initial crew, as can be seen above, was an even split between two of my custom classes, and two of the standard classes, although both of the regular type characters are gonna become a LOT more interesting as play proceeds. Heh heh heh.

The player playing the extremely short lived Kerowack the Thief couldn't make it on the night of the first game, but after hearing us all chattering about it decided to join in. I was afraid he was gonna quit because his character died pretty much one room after he joined the party. They found him trapped in a coffin after being buried alive by some treacherous companions, and they put him right back there after he failed his Poison save. Thankfully, the player returned a couple sessions later as we shall see...
Posted by BigFella at 11:22 AM No comments: 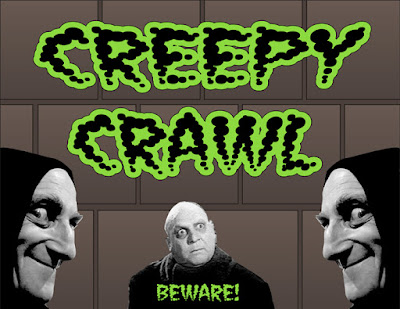 One of the best RPG campaigns I ever ran (IMHO) kind of happened out of the blue, and started one chilly November evening after a day when bulk bags of candy went on sale at a deep discount in all the stores and the bats and pumpkins were being taken down in all the elementary schools and replaced with hand turkeys and pilgrim hats.

As longtime followers of this blog may recall, I have this thing I've often run on Halloween called the Creepy Crawl. It's essentially old school D&D with an old school (think Universal & Hammer studios) horror movie twist. I have custom classes replacing the bog standard dwarves, elves, and halflings, and overall it's more creepy, kooky, ookey, and spooky than normal. Such as normal is in D&D…

After having relocated from Boston to Pittsburgh and secured a job, I eventually recruited a body of co-workers to give my grisly little game a try one evening shortly on the heels of All Hallows Eve. (This was a tech company, and I was in the software department as a graphic artist and UI designer. Naturally, there were many there who were "of the tribe" if you know what I mean, and if you're reading this you probably do.)

Well, they really enjoyed it, and wanted to keep playing. So we decided to try running an hour long game at lunchtime a couple times a week. What blossomed thereafter was a freakishly freeform fantasia of wonderful weirdness, sandwiched in between getting food and getting back to work. I was usually flying by the seat of my pants, because once I ran thru my original event material I had to continue filling in this weird, kinda gothic, kinda schlocky, kinda old school sandbox style game.

Following each session, I'd punch out a quick email updating the players and letting them know where things stood. Recently I was discussing play reports with my incomparable compadre Delta, and for a long time I've wanted to show off the magnificent bizarreness of the Creepy Campaign, so I'm gonna start reposting those update emails here on this blog as kind of a regular series. Should be worth a couple laffs, at least. I know it's early Spring right now and Halloween is months away, but since when does the calendar dictate when I have to be spooky?

These emails will be presented as they went out on the company email system, although the names, dates, and location have been edited to protect the guilty. Do not adjust your set. Any shivers going up your spine are between you and your chiropractor. 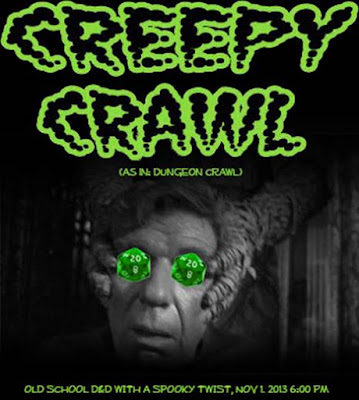 I’ll be running a grisly little something I like to call the “Creepy Crawl” on Friday night, starting at 6:00 PM and going ‘til 9:00 or whenever. Monsters will be mashed, characters will be mangled, crypts will be looted, and a good time will be had by all. 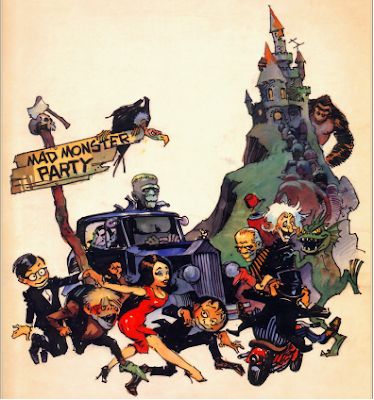 If you guys would like to continue exploring the catacombs, we could make this a more regular thing. Of course timing, as always, is an issue, so here are a couple of suggestions:

1: We could do a monthly Friday night session, that would run kind of like it ran last Friday (Start at 6 pm, go ‘til 9-10 as desired)

2: We could play hour long sessions over lunch. This would necessitate participants packing/getting takeout. We could be flexible with frequency. It could be a daily thing, or we could do it MWF or on Tuesday/Thursday or one day a week or whatever. I can run this rather light, with just pencils, paper, and dice, which makes it easy to set up and get rolling, as well as knock off fairly quickly.

3: If there were enough interest, we could do a weekly game, but I’d probably prefer a Thursday night for that, and it’d only be for 2-3 hours tops.

I’m amenable to whatever, so let me know if there’s interest. I’ll still occasionally pull together a convention style one shot of whatever whenever the mood and inclination strikes.

So here’s the totals for what your gruesome gang of goons have acquired so far:

A good haul, all told.

Your Dungeon Master is pleased.