So what's going on in the city today?

The Mayor and his staff was menaced by Machine Overlord and his Mechanical Minions, but thankfully high tech lawman Tex Mech arrived to defend our civic institutions.
A bank heist was foiled by Galatia, Mighty Maid of Marble.
The sinister Professor Portal nearly overwhelmed two patrol officers, were it not for the timely arrival of the Emerald Shadow.
There was a running battle between The Comet and Mean Streak across town.
The White Knight rescued a damsel in distress from a bunch of punks.
And then ran into Gravedigger and The Unstoppable Dreadnought on a senseless rampage in a fast food establishment when he went on his lunch break.
Captain Futura held forth on her recent defeat of Shock Tower to eager members of the press.
Two friends who took a wrong turn on the way to the comic book store were rescued from a mugging by the elusive Alley Cat.
Finally, Agent O'Connor and her team of investigators thought that they'd cornered The Crimson Thorn, unaware that The Deadly Mantis and The Silent Specter had laid an ambush.
Thankfully, prompt intervention by the Elementelles turned the tables on the craven criminals.
Just a perfectly normal day around here.

Since I was nerdy enough to show off my brand new miniature filing system on my last post, I figured I ought to do a few posts featuring the contents of my spiffy little plastic boxes. This week:

When I was working on getting some minis ready for this year's Helgacon, my eyes and wallet wandered over to Reaper Miniatures, where both were ensnared by several cool superheroes and villains from their Chronoscope line. So I wound up acquiring about two teams worth of heroes.

And of course, what good are heroes without a grisly rogues gallery of villains to battle?

But then I thought that our favorite comic book adventures don't just feature super powered folks. That was a little tougher to pull together, until recently I discovered these plastic figures from Wargames Factory. They're meant to be zombie apocalypse survivors (male & female), but with a little bit of finagling with my bits box and modeling putty, I got a nice range of modern era normal folks to fill out a superheroic adventure.

And so I have brave officers of the law.
Federal Agents or Plainclothes Detectives.
I also had some Reaper Bones tech troopers who make a dandy SWAT team.
On the other side of the judge's gavel I got cheap street thugs.
An armed gang or a supervillain's minions.
And a deadly squad of robots (also from Reaper).
And standing haplessly in the middle of it all, assorted civilians.
I got plans for these guys. Those of you out there in the Helgacon cosmos, look forward to their appearance there next year.

Being a nerd with OCD, nothing thrills me more than getting my toys nicely organized. I just finished whipping my miniatures collection into partial shape, and so I thought I'd blog about it, as one does.

I've found that these bead organizers are great for storing and transporting minis. I favor this style manufactured by Darice which can be picked up at Michaels or whatever your local craft store might be for about US$2.50, with an additional 99 cents for a bit of foam to line the bottoms of the chambers. You get about16 small cells and 1 large one, which as you can see here with my Fantasy Heroes & Henchmen set holds a decent selection. 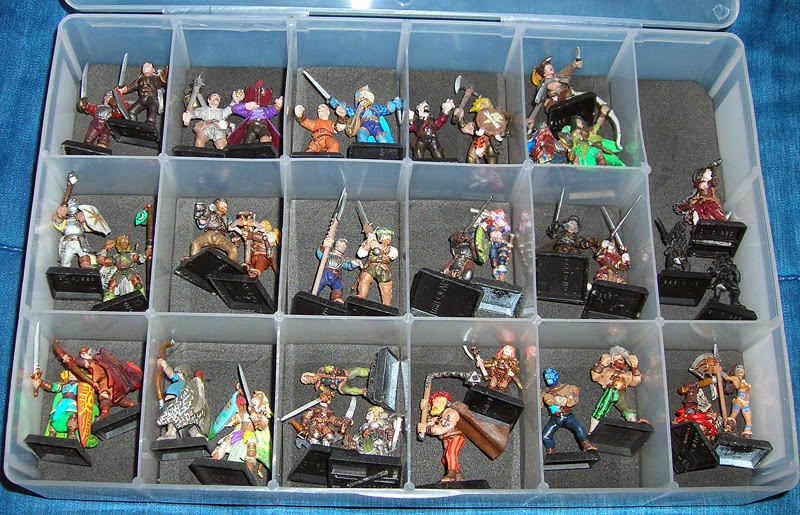 They're cheap, very nicely modular, and with a little extra foam padding and some rubber bands I've found they stand up to air travel in a carry on suitcase quite nicely. And they fit pretty well in a lot of places at just 10.75 X 7 X 1.5 inches. Being able to travel with minis is a big deal for me now that most of my gaming is in remote locations.

Now all I need is to figure out a good storage case for larger stuff. It's a bit more of a challenge. For lack of a better oxymoron, these miniatures are too big.

Have fun, will travel!

P.S.: It is also as I predicted/feared: I've gone past collecting individual miniatures to collecting entire genres of miniatures. Ah well, at least I got someplace to put 'em now...