And THAT is how Superman is supposed to handle a spaceship full of goons!

If only the makers of "Man of Steel" had watched this, then maybe they would have gotten a handle on the whole Superman thing a little better.


Cribbed from the mighty Bully who's philosophy about comics is something Hollywood really needs to learn if it's gonna keep chuckin' superhero movies at our heads.

Also a hat tip to the equally mighty Delta who pointed me back towards Bully's write up about the movie. Seems that there are a lot of things a big fella like me and a little stuffed bull can see eye to eye on.
Posted by BigFella at 10:53 PM 4 comments:

Several Reasons why "Man of Steel" was a terrible movie. 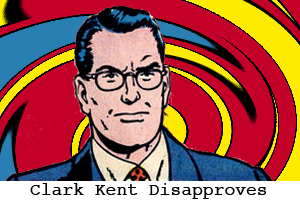 So I just sat through "Man of Steel" last night, and since the purpose of the internet is to gripe about movies, I thought I'd use this poor neglected blog to take a crack at it. I sat through most of the showing feeling rather angry and resentful at the movie, and thus I give vent to my spleen.

There's spoilers in this, but by my lights the movie was already pre-spoiled so proceed as you may. I haven't had a movie piss me off this badly in a long time.

1:            Postmodernism is the primary kryptonite that makes this movie not work on a fundamental level. Writers who have marinated in that philosophy are left with the belief that the only people with clarity of purpose and motivation are villains. Everybody else, especially those who take the hero's role, have to wallow in angst until enough atrocity has been committed to finally spur them to action. Superman took way too long to get his act together and stand against the evil Kryptonians. I spent most of the film wondering when "The Man of Steel" was gonna show up.

Writers don't seem to understand aspirational role models anymore. The role of a Superman type character is to demonstrate the values that help us want to be better people. Superman is supposed to be an example of using strength to help and protect others, he's the guy who runs into the fire instead of away from it because he can. The contrast between Kal El and Zod should be the contrast between protector and bully, but Superman dragged his feet for so long and struggled so much it really seemed he wasn't very good at his role. His struggles with the invaders bring me to point 2.

2:            Part of the postmodern view of Superman that hinders contemporary works about him is the view that he's overpowered, that you can't get good drama out of him because he can solve every problem instantly. The writers tried to compensate for this view by piling on the disadvantages for our hero.

He's facing not one, not three (as in Superman II), but a whole starship full of evil Kryptonians who are born fighters armed with battle armor and an arsenal of terrible weapons. He keeps getting dumped into situations where he's exposed to the power sapping effects of the Kryptonian atmosphere, while any points where Zod & co. have to deal with the problems of Earth's atmosphere are glossed over and discarded. At no point does his long, painful process of adapting to his new home serve to give him advantage over the invaders. The bit where Zod struggles with the sensory overload and pain of adapting to Earth should have been a game winner for Supes. It would have shown a nice contrast between the assimilated immigrant vs. the conqueror, but again they blew it off.

My big problem with this dramatic deck stacking is they piled on so much of it that it went from "How's the hero gonna get out of this?" to "The hero clearly can't win, so when are they gonna get around to flipping the "hero wins anyway" switch and ending this?" Thus, I was bored out of my freakin' skull waiting for the denouement.

I guess the makers of this movie thought that having Supes flail helplessly against overwhelming odds some how made him more "human" and "believable". Here's a little tip, o makers of movie "magic". WE DO NOT COME TO SUPERHERO MOVIES TO SEE "HUMAN" OR "BELIEVABLE". WE COME FOR THE OPPOSITE OF THAT!

3:            Collateral damage. Soo much collateral damage. Pursuant to my point of Superman being a defender and protector, he sure as hell didn't do a good job of it. Vast swaths of Smallville and Metropolis were crushed, but only Lois Lane and the handful of Daily Planet staffers were deemed important enough to focus on. Soldiers were casually crushed and killed by the bad guys. Planes were shot down over populated areas. Are we to believe all those skyscrapers falling in a very crass attempt to evoke 911 had been evacuated beforehand? Superman let a LOT of people possibly die (but it's offscreen, so it's okay. Idiots.) while the Kryptonians slapped him around in their overpowered, overdesigned armor.


Superman's supposed to STOP wanton destruction, not be an accessory to it. Again, a difference between him and the villains that the makers of this film didn't bother with as they gave in to their need to dazzle us with gobs of cgi carnage. It pretty much got to be like drinking from a firehose.


Supes' little angst spasm, complete with "NOOO!" at snapping Zod's neck at the end was particularly gratuitous and lame. Buildings full of ostensible dead, and he gets his absent little red shorts in a twist over taking out the evil space bastard that caused it all? I can't articulate how much contempt and disdain I have for this sort of wankery.

4:            Jonathan Kent (Kevin Costner) had the stupidest, most pointless death I've ever seen in a movie. He runs out in front of an onrushing tornado to save a dog, then stands there and forbids his superpowered adoptive son to save him as the storm engulfs him in a "poignant" scene.

They really garbled the hell out of the message of Superman's upbringing. The classic version is the Kents taught Clark to value life and freedom and to stand up and do the right thing. In this movie Jonathan Kent's lesson was one of uncertainty, don't do the right thing if it could get you in trouble. The lesson of his stupid, stupid death should have been "Inaction when you can help causes tragedy." which should have spurred Clark to step up to the plate and become committed to saving people no matter what, but apparently the lesson, like most of the plot points in this muddled mess, didn't take.

Clark still had to go ask his mom, his pastor (who we only saw once so they could slather on the film school 101 Christ symbology), and others if he ought to do something about these aliens and their looming doomship and their "surrender or die" talk. My conception of Superman: As soon as they said "We want Kal El." he would have been there with his hand crimping shut one of their gun barrels telling them to get the hell off his planet.

5:            Art direction. Apparently Naboo and Gondor had a baby and they named it Krypton, but the kid looks suspiciously like the milkman H.R. Giger. One part I actually liked was the bit where the ghost of Jor El does his big infodump for Clark, and the whole room becomes this flowing heroic art deco monumental sculpture to illustrate. All of Krypton could have looked and worked like this and it would have been awesome, and a worty successor to the glowing, crystalline Krypton of the Richard Donner version. The whole Krypton as sterile technocracy idea kind of fell apart seeing Russel Crowe in renfaire garb riding a dragon to get back to his lab. Muh. (Meh + duh)

Everything was too busy and too derivative and too dark. We're going through another baroque period (if not full blown Rococo) and I can't wait until we as a culture don't need everything in a fantasy or science fiction movie to be loaded down with knobbly loopty pointlessly organic art nouveau spluth. How about you present us with images we can make sense of without having to squint, Hollywood?

6:           The whole "Kryptonian Codex" subplot was a garbled mess. So Clark's got the genotype of all of Krypton in his cells and Zod wants that to reproduced Krypton and is gonna kill of the human race but he's pissed at Jor El so he'll make Kal suffer bla bla bla. How about he's a jerk from space who wants to kill us all and needs to be punched?  The krypton scene's dragged on for WAAAYYY too long, and it was a big goofy, ultimately futile and distracting wad of cinematic padding.

7:          Speaking of Krypton. I'd like to join the chorus of voices in the comic/fantasy/sci fi community in begging Hollywood to please. Pleeeeaaase. PLEASE spare us recounting the hero's origin. There are anaerobic bacteria clinging to thermal vents in the Marianas Trench who might not have heard Superman's origin story, but the rest of planet Earth has it covered.

We know it. Really! And for anybody who might have missed that bus, there are entire stores full of colorful, fully illustrated books, that can spell it all out for you in the time it takes to eat your lunch.

I want to see Superman, not Clark Kent in a bad beard and hobo outfit re-enacting the first half of "Batman Begins". Plus the repeated flashbacks all the way through the movie, especially rehashing things again and again, really broke up the narrative momentum.

What little I liked.

I guess I should be a mensch and say some positive stuff, but there's not a lot to go on.

I thought the scenes where Supes was dealing with the gov't were in the vein of what I was looking for with the character. He can't be intimidated, harmed, or controlled, but he's a good guy and he wants to help and he's not going to hold it against us that we're nervous little primates. Too bad all that wisdom and self assurance boiled out his ears whenever Zod and his pods showed up.

Again, the art deco heroic sculpture thing in Jor El's infodump was a nice bit of design, and it would have been cool if all the Kryptonian stuff was that way. (Although in a better Superman movie you wouldn't have seen much of it 'cos you wouldn't be spending a quarter of the film on back story.)

I thought them wrapping up with Clark Kent hiring on at the Planet was nice, and actually was refreshed by the idea that Lois knows it's Supes under those glasses. Some traditions don't need to continue, and it was as refreshing as Tony Stark looking at the camera and saying "I'm Iron Man." at the end of his movie.

Long winded, bombastic, tedious, and completely missing the point of what Superman is supposed to be about. Give it a pass. It's everything that's wrong with superhero movies today.
Posted by BigFella at 5:05 PM 4 comments: