This one's a real looker...

This guy got painted up over the past week while I was working on other stuff. Another pretty iconic D&D critter a la Reaper. He was an impulse purchase, once again driven by the fact that Bones are so wonderfully cheap, and has been sitting in my backlog box for a long time.

I've never run a game with a Beholder in it, although I guess I'm more than adequately equipped to do so now. I tend to reserve those rounded bases for more science fiction themed minis, but I think this guy could play in a variety of sandboxes, depending on the situation. 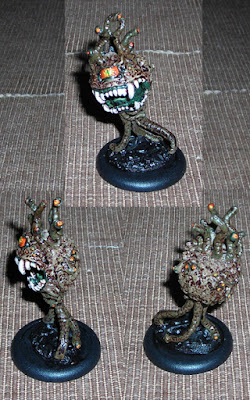 I do wonder what initial games with the Beholder must have been like, back in the days when the Greyhawk Supplement was just a twinkle in Robert Kuntz & Gary Gygax's eye, so to speak. (From my reading on the 'net, I gather that Kuntz's older brother Terry came up with the Beholder, and it caught Gygax's eye, again so to speak, as a good candidate to add to the monster roster.) 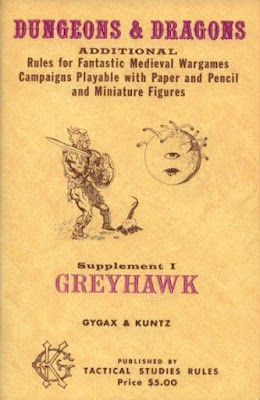 Beholders are very much a D&D monster, something more out of a pulp science fiction story than folklore or fairy tales. They feel almost like a pen & paper prototype for a video game sprite, a list of game effects with a cursory personality (they're mean and bad and want to kill you) and a thin veneer of monster colored paint wrapping the whole thing up.

Of course as 40+ years of D&D have passed they've been fleshed out and riffed upon. (They got a big boost to their backstory in Spelljammer, which I still have a fondness for, even though it could have been a lot better than it was.)

I may sound like I'm being critical, but actually I kinda like how semi-abstract they are in earlier editions. They're a product of the rising creative tempo of the game, back when there weren't any boundaries on ideas and anything strange and memorable could take root.

So here's lookin' at you, Beholders.
Posted by BigFella at 4:37 PM No comments:

Madness In The Mail!

Hey hey, lookee what I got! 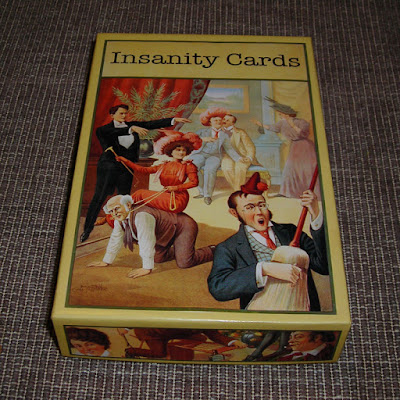 Yes, it's my pal Paul's crazy cards for any sort of role playing game that saps your sanity, a system-neutral snap on supplement to help your players act out going all oofty-mcgoofty when confronted with things the fragile human mind was not meant to know.

You can get a copy of your own right here: https://www.thegamecrafter.com/crowdsale/insanity-cards

Posted by BigFella at 2:46 PM No comments:

My lady riding the sea turtle from yesterday isn't the only rock ribbed reptile in my collection. Here are a few more hard shelled horrors to contemplate.

First off, a buncha what Reaper calls Spikeshells. I painted 'em up for "Island on the Crescent Sea" but they never saw action. Still good to have as heavy support for lizard men or other scaly scaries.
They haunted a domed temple on their island where you were bound to encounter this guy. 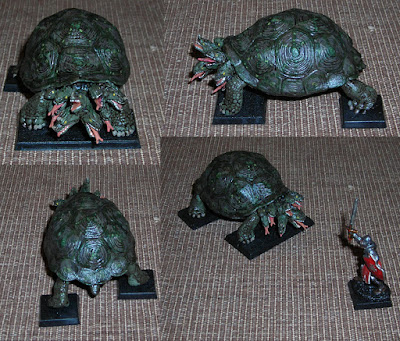 He's a custom job, built from a Schleich giant tortoise and a bunch of GW lizard man heads I had on hand. A little glue, a little paint, and I've got a heavily armored hydra-esque behemoth to keep your hapless adventurers hopping.

Plus this guy can pull double (or triple, or as many heads as he's got) duty as either a magical monster in a fantasy game or a massive mutant in a sci-fi or Gamma World game.

I originally cooked up the idea for this beastie a while ago when I was making up swamp monsters for the Southern fried follow up to my original Mutant Bastards game. Behold, and beware, the Snag.

If you ran into one of these in the river, you'd be in trouble. Hopefully as this year rolls on I'll be able to dredge up some more mutant mayhem. We'll see.

Posted by BigFella at 3:44 PM No comments:

As I'm mostly a dungeon delving GM and not much of a wargamer, I don't tend to have a lot of use for mounted figures. I tend to like minis that are the characters or creatures as is without accompanying mounts. (And I kinda don't favor figs with a lot of set stuff built up under 'em too, like vampires with a tombstone and whatnot. Kinda immersion breaking, honestly. I know it's nitpicky and overly literal, but am I supposed to believe Count Blahcula dragged that stone (often cross shaped which raises even more questions) behind them into the dungeon or drawing room or whatever? But I digress...) I prefer my figs on their own two feet and in a generally kinda neutral pose.

All that rambling preamble aside, I do occasionally have use for mounted figures on special occasions, so here are a few that have cropped up in convention games I've run over the past few years. All of these are from Thousand Year Sandglass games I ran at past Helgacons.

First off, we have the dreaded Kordoka raiders, scourge of the deep deserts mounted upon their carnivorous Leopard Horses. I got these guys intending to do a running mounted battle across the dunes. I've got 4 swordsmen, 4 lancers, 3 archers, and a mounted sorceror armed with a high speed version of Flaming Sphere that worked kinda like a hunter-killer fireball.

Sadly the encounter was stopped before it could really get rolling thanks to several well placed regular fireballs and other mass damage spells from the party that I should have anticipated and accounted for, which is part of why I view "The Black Heart of the Burning Lich" as one of my weakest outings in that particular campaign. I'm not really good at mass tactics from the DM side of the screen (like I said, not much of a wargamer). In more adept hands, this would have been a pretty awesome fight. Ah well. 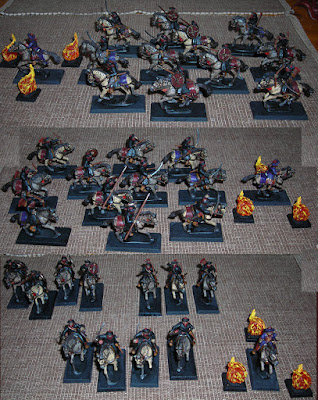 These minis came from Gripping Beast, their Arab Light Cavalry box. The sorceror's fast rolling flame balls are from Reaper. All were obtained from my awesome local game store Legions Games.

Next up, a passel of pissed off purple pygmies commanding colossal crabs. That year I was doing a Sinbad-esque seafaring jam called "Islands on the Crescent Sea" and I needed some nasty natives to menace the heroes and their ship as they put into port on a series of deserted islands. 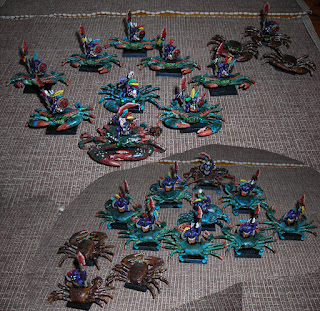 This was an example of kludging together a bunch of stuff I had on hand. The pygmies were intended by Games Workshop to be Forest Goblin Spider Riders, and came with The Battle of Skull Pass box set. (Which at the time, circa 2006, was a great deal for about $50 bux, giving you a pretty decent amount of minis. If only GW product was so reasonable now...)

Well, the spiders were too awesome to not use just as giant spiders. (Or convert into even worse things.) So I was left with a bunch of crouching goblins decked out in loincloths and feathers. But then I had a Reeses Peanut Butter Cup inspiration with a handful of crabs from a Target bought set of sea creatures, and there you go. I only had about 5 crabs vs. 10 gobbos, so I got a bunch of assorted crabs via amazon.com and improvised a few special characters. 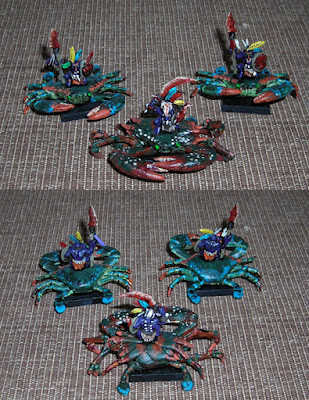 Here's their chieftain and his bodyguards. The mixed crabs had some beefier versions of the crabs I used for the rank & file, so they became the chief's retinue, and I did some putty and bit boxing on the big little man's horrible, barnacle festooned doom crab to make it appropriately monstrous and gnarly.

Naturally hostile natives gotta have a shaman, so I mounted the unit musician with his skull bonker on a hallucinogenic looking fiddler crab. 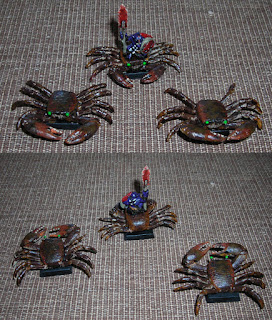 Finally, since all I had left were some smaller crabs of a different species, I did a hunter pygmy with a pack of tracker crabs to patrol the beaches and hassle any castaways who dragged themselves ashore.

Finally, taking my inspiration from my crabby little creeps, I mounted an amazon mini I had from Reaper's Savage Beauty box set on a sea turtle, and created Julnar, Daughter of the Sea, who was more of a benign encounter/guide type character. 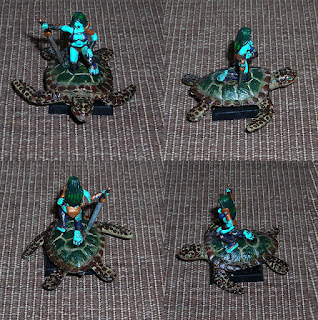 This is another example of a mini I didn't really know what to do with. (Again, call me over literal but I just thought she'd look odd kneeling her way around the dungeon or whatever when everybody else was in "standing ready for action" kinda poses.) I think she works pretty good on turtleback.

And so that's pretty much what I got for mounted stuff, aside from a bunch of old knights from Battle Masters that my brother and I painted up waaay back in the day. (Like, I'd say 1995-1996 or so.) I painted the three villainous ones on the left and my bro did the noble knights errant on the right. They're okay for early efforts painting wise but honestly don't see much action on the table.  (Pardon the dust. They usually hang out on shelves when I have shelves to spare, right now they're taking up space awkwardly in a plastic container in my closet.)

I'm pretty much including them just to be complete in my cavalry coverage.

Also, whoot! I surpassed 2016 for number of posts! Onward and upward!
Posted by BigFella at 12:18 PM No comments: