These strange magical potions are always found in sets of three, and are reputed to have been originally created in the lost city of Ralay Hoa, which is said to be in the unexplored territory of the barbaric tribes of Hana.

They follow the standard rules for potion onset and duration, activating upon the round they are drunk and lasting for 1d6+6 turns. Only one of these potions may be drunk by an individual at a time. If mixed they will cancel one another out.

Potion of Liquidation: Upon imbibing this oily greenish fluid, the user becomes capable of transforming into a liquid state, which can flow through any opening that water can pass through. They can flow along at a rate of 60' (20'). If they choose to remain still, they are indistinguishable from a puddle of slightly greenish tinted water. While the potion is in effect, the user can switch between states at will, and gain a Save vs. Spell in combat to avoid being struck by weapons by spontaneously liquifying. All equipment worn or carried by the user upon drinking the brew will liquify along with them, but any objects picked up or acquired while it is in effect will not. While in liquid form, the user cannot lift or move anything but the lightest, most buoyant objects.

Potion of Coiling: This thick, purplish liquid brings on a strange transformation in the user's limbs when quaffed, causing them to shorten by about 5" and become like tightly coiled steel springs. While under the potion's effect, the user may make leaps of 20' high, or 50' distance, or may move at a rapid, springing gait of 240'(80') if unencumbered. They may also extend their arms out to 50', allowing them to attack distant foes with melee weapons or punches and kicks. The fully extended arm/leg span is 100'. The user may also choose to make a constriction attack, doing 1d8 per round if they manage to successfully grab a foe with both arms. (This requires two separate melee attacks.)

Potion of Multiplication: This murky, reddish tincture allows the drinker to will up to four duplicates of themselves into existence. These doubles act in concert, commanded by a single will. Each has 1/4 the hit points of the original. If slain in combat they vanish instantly. By some strange factor in the potion's magic, in a combat situation the original is always the last to take damage or fall, unless all are subject to an area effect. Any magical devices carried by the user won't be duplicated with enchantments, and will only function as mundane versions of whatever they are. Spellcasters who drink this potion do not gain additional spell uses, but the duplicates can cast different spells from the original's daily allotment. (i.e. A 2nd. lvl wizard with 2 1st. lvl. spells could have one duplicate cast one spell and another cast the other one, using up their memorized spells for the day in a single round)
Posted by BigFella at 11:51 AM No comments:

Created by the Astrodukes of Fahr to stem the tide of evil, these magical weapons appear as the bronze hilt of a sword lacking a blade of any kind. If casually handled that is all it will seem to be, and it can be easily kept in a belt pouch or pocket.

When wielded with intent by a Lawful being, a blade of invisible force manifests that functions as a +2 magic weapon. Against Chaotic enemies, the blade is razor sharp and does 1d8+2 damage. Against Neutral foes, it becomes more like a blunt rod that does 1d6 damage. Against a Lawful opponent the blade will not manifest.

The length of this unseen blade is variable based on the desires of the wielder, and can be anywhere from dagger to pole arm length with no appreciable change in weight.

When the hilt is handled by a Chaotic being, there is a 20% that the blade will manifest itself, cutting or stabbing them for 1d8+2 damage.

In certain dens of evil where these weapons are known, it's possible to bluff those denizens of lesser intelligence, putting them to flight by brandishing a simple sword hilt bereft of its blade. Such is the fear that the Bladeless Sword engenders in the dire and darksome.
Posted by BigFella at 5:26 PM No comments:

All Hail the Whistle Pig! 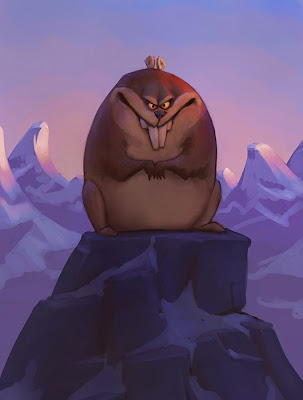 (Click the song link, you won't regret it. Plus, there's a reference to 10' poles, so it's gaming related!)
Posted by BigFella at 11:12 AM No comments:

The Continuing Adventures of LL at Paul's

Just a quick shout out to a new blog chronicling the wacky hijinks in my buddy Paul's Labyrinth Lord campaign, which time and distance now precludes me from joining in on.

You can read all about it here, courtesy of ExitSanity. a.k.a. Bazil the Dancing Mage.

So check it out.
Posted by BigFella at 9:47 AM No comments: