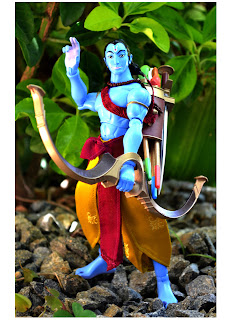 Well, I've kinda been distracted by other stuff, which is modern shorthand for slacking off, mostly, but I've also been relocating from New England to my old stomping grounds in PA.

So anyway, the reason I'm delurking is to tout the VERY cool kickstarter project that my awesome bro and his partner have just sparked up.

It kinda relates to gaming, I reckon, 'cos it's called the Hero Project, and it involves super sweet action figures of world mythological heroes.

Check it out, there's a lot of cool swag in the offing if you lay down some moola. One of the items is a cool art book full of illos of their first hero, Rama from Indian mythology. I contributed one of the illos, so if you pledge at that level I'll be extra stoked.


Oh, and P.S. don't go away, I'll get around to putting some stuff up here once I get other stuff straightened out.
Posted by BigFella at 9:20 AM No comments: