So a couple of years ago I was asked by my manager at the time to give a talk about/run a session of D&D at the game design course he was teaching at community college. I was tremendously flattered to be asked, and of course it got the ol' wheels turning.

I wanted to jazz up the presentation, so I decided to dig into my bits box and make representative minis for each class in the game (3rd. Edition). With the exception of the bard's lute, which I had to special order, most of these guys are built from various Warhammer plastic parts, mostly Empire militia (which were originally used for the Mordheim skirmish game, perfect for custom building dungeon delvers, at least human male ones). Took me about a week to paint up the initial set of seven (fighter, rogue, wizard, cleric,barbarian, elf, dwarf, halfling) and as time went on, I kept having ideas on how to do the rest of the classes, so eventually I had a full set, plus some demihuman variants.

I'll also note that the sorceror started life as a mini for a character I played in a short campaign, a master of mystery known as Hieronymus Voss. Hah HAH! (Voss kind of talked like Phil Ken Sebbin from "Harvy Birdman, Attourney At Law". But I digress...)

So here are the results. L to R, you've got a halfling rogue, a bard, a monk, a human rogue, a sorceror, a wizard, a barbarian, a fighter, a paladin, a cleric, a half elven druid, an elven ranger, and a dwarf cleric.

The demo game was a hoot, and since then they've come in very handy as player character minis in many a game.

Uh oh, looks like some trouble ahead for our heroes! 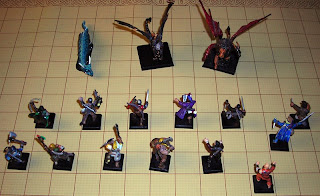