Now is the time for punching!
The following is an attempt to create an unarmed fighting class for Labyrith Lord with a more Western flavor. I envision them more as pugilists, wrestlers, and overall tough guys than as Shaolin style aescetics dropped into Medieval fantasy settings. Think Samson, Hercules, Little John, Popeye, Asterix, or any character Brian Blessed ever played, and you're pretty much thinking of these guys.

This is a conversion from the Handsmen that appeared in the Fort Standish sandbox campaign using the 3rd. Edition D&D Monk rules.

Across the land, there have been despotic overlords who have decreed that certain fractious villages were no longer permitted to arm themselves. Being, as they were, fractious, these communities chose to obey the letter of these laws, but not the spirit, electing to strengthen their bodies and train in the art of fighting with bare hands or whatever weapons could be improvised, and thus the Handsmen were founded. From Clobberton and Musseldorf, Donnybrook and Greater Fracas, legends have grown of the feats of strength and daring these hearty folk were capable of.

Handsmen (and Handswomen) of different areas have taken to traveling to other villages to test their mettle with other schools, usually in contests of strength (such as hurling stones, wrestling bears, bending bars, or hurling bears) or, more commonly, public brawls. When two Handsmen from different villiages meet while travelling, it is not uncommon for them to enter into a challenge right on the spot. The loser of these challenges is often compelled to undergo an embarrassing punishment, or if they fought well and the winner likes the cut of their jib, to owe the victor a favor to be collected later.

Handsmen of certain traditions are known to cultivate impressive mustaches and/or beards (the Handswomen of these villiages respond to this with heavy pigtails that can often be used as weapons in their own right). Handsmen from the hamlet of Lucalibra fashion colorful masks that they never remove except in defeat. Handsmen live large and boisterously, and are prone to great joy, great rage, great melancholy, and great adventure.

ABILITIES:
Handsmen are rigorously trained to fight unarmed, and have a higher damage when they do so. Starting at 1d4 at first level (plus Str. Bonus), at certain levels they gain the ability to hit for even higher damage. Handsmen may only use clubs, flails, hammers, and quarterstaffs as weapons, and have an uncanny ability to create these weapons out of any furniture or foliage that comes to hand. (Hercules Haas, the strongest man in Musseldorf, once beat an entire garrison of the Duke Sable's elite guards senseless with a milking stool.) There comes a point in a Handsman's development, however, where such weapons are merely ways to offer themselves a challenge, simply because they can do equal or greater damage barehanded. (Proud Molly Stubbett, a Handswoman from the coastal villiage of Garsmack, once wielded a rowboat as a weapon for an entire year on a bet.) Handsmen fight using the Fighter's to hit progression.

Handsmen also have a special ability in combat, known as the Clobber. When a Handsman declares they are Clobbering a foe, they roll a d20 normally to hit, and then roll a d20 to see if they have knocked their foe unconscious for 1d4 turns. Their chance to Clobber is equal to their level, so a 1st. Level Handsman clobbers on a 1 in 1d20, while a 12th. level Handswoman, for example, would clobber on 1-12 on a d20. A failed clobber attempt only does 1d4 damage if it doesn't knock the foe out. Undead and constructed beings like golems are immune to this power, while large creatures like giants and dragons gain a save vs. Paralysis to avoid this effect. (Ugly Stan Bransson from Plugville once punched out a black dragon that had been devouring his cattle, then he decked one of his prize bulls for leading the herd into the swamp in the first place...)

Handsmen also train to increase their strength, although there are rumors that they enhance their prodigious abilities with magic potions brewed by local druids, or diets rich in leafy green vegetables. They gain a strength bonus at certain levels in addition to whatever strength bonus may come from their STR. stat, due to their knowledge of leverage and pressure. This bonus only applies to feats of strength such as forcing doors, bending bars, and lifting gates.

Finally, Handsmen disdain the use of armor (It is often difficult to get them to even wear a shirt.) Instead, they toughen themselves through exercise and mortification regimes, like frequent dips in frozen streams or sleeping in wolverines' burrows. At certain levels, the Handsman's armor class gains a natural bonus. They also do not use shields, but can benefit from protective magic items like Bracers of Armor if they can get them. (Although they risk derision from their fellow Handsmen for being pantywaists...)

Their abilities improve according to the following chart: 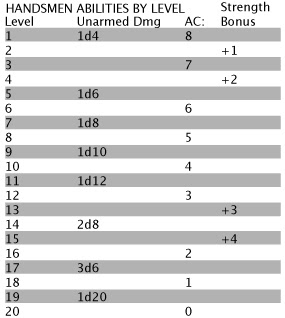 Upon reaching 9th. level, a Handsman may choose to found a school to train others in the unique fighting style they have developed. These schools take the form of a fortified building, and may be built anywhere, from large cities to remote wilderness locations. Upon doing so, 3d6 1st. level Handsmen (and Handswomen) will come to study under the school master's tutelage. Once they hit 5th level, these students will strike out on their own, to be replaced by 1d6 new 1st. level apprentices. If any students are killed in the course of their studies, they will not be replaced.

"C'mon boys, lets go beat up some ogres..."
This class is hereby designated as Open Game Content via the Open Game License.
Posted by BigFella at 8:08 PM