So yet again, here we are, telling tales out of school. Old school, that is. Gaming. With a capital G. Yo.

Yeah, it's late and it's Memorial Day tomorrow so what the heck. Not 100% in the mood to write this but if I don't I won't get around to it later so there you are. Live with the non-sequitors.

So when last we left our heroes, they'd lost their entire back nine to various calamities, and were down to the primary characters without benefit of faithful henchmen/meatshields.

We rested up the night in the Shrine, and climbed down the long shaft to the long tunnel to the dungeon below.

When we got down there, we decided to try a new methodology for exploring, which was to map out all the hallways, ignoring doors, so as to get a good general lay of the land, and THEN going thru and hitting the rooms. This, overall I think, was a pretty good plan of action. I won't bog this post down with every twist and turn we went thru, and will instead hit the highlights of the rooms once we got the halls sorted out.

The only wandering monsters we ran into in all this hallbusting were the survivors of the lizard man pack (pack? I wonder what a plurality of lizard men would be called. A school? A gang? A handbag?) Anyway, we ran into them again, and I think we soundly whupped their scaly butts without too much misery and woe. After last week's troglodyte attack, these guys were literally a breath of fresh air.

The first room we explored fully, and got into trouble in, was a large chamber that seemed to be some sort of nautical museum. There were paintings of ships on the walls, some suits of armor with a vague oceanic theme in their decoration, a chest which we found to contain various pieces of scrimshaw, and these two statues of giant crabs in the northeast and southwest corners, both made out of coral. When we opened up the scrimshaw chest, the statues animated and attacked, which is pretty much par for the course in D&D unless it's an abstract sculpture (Those, instead, usually have curses. It's hard being a curator in a dungeon.)

The group split up and started whaling away on them (note the nautical verb there...heh) I think the Deacon and Yøgund took the one in the left corner while Kashim and the thieves took the one on the right.

I got a couple of good whacks in with the Mojo stick, but things kinda got outta whack in general when the sculpture grabbed the wandering cleric around the middle and kinda started crimping him with maximum prejudice. I actually got taken down to 0 and got a crit effect, namely crushed ribs. Everybody got kinda nervous at that point, and all took a shot at the rampaging crab statue, since the other had been busted to rubble by then. It was a bunch of bad rolling all around, and it looked like curtains for the man with the silver stringed mandolin...

The Deacon was only saved at the last minute by a thrown dagger from the party mage, Elef the halfling, who was in henchman mode that night. By extreme good fortune he did just enough damage to take the thing down, and the Deacon spent both his healing spells on himself to cancel the crushed ribs and put some hit points back on his bones.

The hit was SO fortuitous that I had to get confirmation from Paul, for which again I apologize, since it IS poor manners to accuse a DM of fudging, especially if it benefits you. Paul doesn't run that kinda game though, and this is Old School gaming, baby. Fudging is for bake sales! He showed me the HP tally and by golly it was those 2 hps that made the difference. Especially since Elef has a Strength penalty, so if he'd done anything besides throw the dagger, it woulda been it for the Deacon, as the crab's claw was doing auto damage.

Anyway, enough about my character's near death experience. We squeaked by and that's good enough. We bagged up some of the coral chunks from the crab in case they would be valuable, and swiped the scrimshaw, and set out on our hall exploration.

The next room of note we encountered was what appeared to be some kind of jail, with rows of 5'X5' cells, some with skeletons chained up inside, and a torture chamber at one end. I don't rightly recall what set it off, but we did something that caused this unearthly, howling voice to start bellowing "FREE ME!" ad nauseum.

Eventually, the caterwauling attracted a bunch of skeletons, but they didn't go for much 'cos the Deacon and Yøgund can now both turn undead. Actually, it was a good initial outing in the smiting of the unliving for Yøgund, 'cos even though my silver stringed mandolin is powerful juju against the walking dead, I rolled for crap, wheras Yøgund got a good hit in, spiritually speaking, and turned 'em away. (I may be conflating this encounter with a gang of zombies we met later in this narrative, but regardless, it was a good outing for our resident pants wearing paladin.)

Once the skeletons were de-boned, we loitered around trying to FREEE the shouting spirit, mostly by busting the non-moving skeletons loose from their chains and chucking them out the door shouting "Go! Be Free!", but nothing was working.

It's here we coined a term for what we're discovering is a dungeoneering no-no: monsterbaiting. In other words, getting too focused on one encounter and wasting time that gets converted into greater wandering monster checks, when the prudent move is to Get The Früdje Out! While a certain aspect or foe in the dungeon may be fascinating, keep an eye on the main goal, which is getting out alive and not attracting more attention than you can handle by hanging around.

Don't monsterbait, kids. You'll go blind (when your torches burn out 'cos you've been hanging around a screaming magic mouth for hours.)

Another minor encounter in this area was a room full of yellow fungus that threw out a big cloud of spores when we tossed a torch in there. We slammed the door and decided to give it a wide berth. Fungus, statues shaped like anything, and the color yellow are all vital warning clues that a healthy dungeon delver should pay close attention to. (As pointed out in Michael Curtis' wonderful Dungeon Alphabet. Pick up a copy, won't you?)

We also found a shrine with a baptismal font of some kind in it, which self filled with what we think might be holy water, so we filled some spare vials with the stuff. This came in VERY handy later on, as I shall elucidate in the future. There was also a statue or something there which we had to firmly convince Gentleman Jack Getz not to pocket right away. (Look, if you've seen Raiders of the Lost Ark, you don't swipe the golden idol until you've thoroughly stretched and are ready to outrun the poison darts and giant sphere trap...) I'm sure we'll pilfer it when we're ready to exit, but better not to offend the gods while we're still in the field.

Moving on, after we'd fully mapped the halls we entered a crypt in the north quadrant where we ran into a bunch of zombies lying in a room with a big sarcophagus. They got up, and we put 'em down, and like I said earlier I'm not sure if this was the room where the Deacon got lousy rolls and Yøgund got to show his stuff as an undead turner, but once they got turned we hacked 'em up good.

The sarcophagus contained the dried out corpse of a priest of Kor, and he'd been buried with this rod with a bronze sun disk on top, so we swiped it. Again, a little nervous that we were tugging on something that might bite us, but a staff is too hard to pass up, especially since I've been so happy with the mojo stick we got from the gnoll shaman. We need to Detect Magic on it to see, but that's an in town spell, not an in the field spell for our resident mage.

The next door in the north section led to a storage room full of barrels. I'm not remembering much beyond the barrels. I think there might have been some normal sized rats in there, but even if there was something fightable, it wasn't much for being memorable. I'm not even completely sure what the barrels contained. Health and ammo? Me no know...

The final door we hit for this evenings festivities was where we started to accumulate trouble. We walk up to it, and Yøgund turns the latch. And feels a prick on his finger.

Well, mercifully it turned out to be a paralytic poison, and not a fail n' die type poison, so we now had a nice temporary stretcher to carry out loot on. (I kid, we probably would have used him as a battering ram before we'd use him as a treasure sled...)

So anyway, the door turned out to lead to this odd hallway that surrounded a room of some sort. We pressed on, I think hoping whatever we found beyond this trapped door would have some kind of poison antidote or something hidden among it's mysteries. We rounded the corner, and found the inner door, but then heard some movement in the hall behind us.

Kashim, our mighty, foolhardy desert warrior, rounded the corner and saw a rat skeleton floating in the air about a foot off the ground. He was about to charge it, when the Deacon came around the corner and urged him to stand off while I tried to turn what I thought was some kind of undead. That didn't phase it, so I pulled one of the vials of what I hoped was holy water and tossed it at it. This stopped in midair about a foot above the rat skeleton, and the sick realization of what I was looking at hit me.

Yep. Always 10'X10' room for jello. It was a fershlugginer GELATINOUS CUBE!

Yeah, thank goodness Kashim didn't end up charging the thing. Of course, we were now isolated as it was blocking our way out. That's where we ended the session, with a paralysed paladin and a perilous pythagorean protoplasm preventing our passage. Perhaps we will prevail, perchance we'll perish. I can't possibly predict. (Okay, I'll stop. Gettin' too much spit on the screen...) 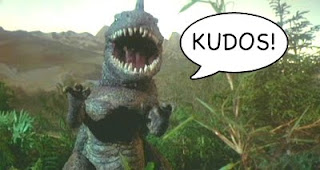 At this point I gotta throw a big old kudosaurus to Paul for one of the best monster reveals I've seen in a while. The floating rat skeleton that we thought was an undead and then suddenly realized was actually something else. It was an impromptu decision on his part 'cos the cube failed it's surprise check, and it was a good way to represent it. CHOICE! Golf claps all around.

Thanks once again to Paul and the 10d gamers for an excellent session.
Posted by BigFella at 8:27 PM