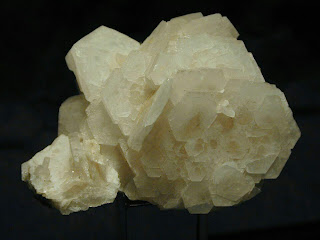 In obscure tomes of the most knowledgeable alchemists, and the recollections of the most ancient of delving kingdoms of the peoples below, there come stories of a certain type of mineral deposit known as Sovereign Crystals, or the Coins of the Earth Lords.

In form, this rarity is a sparkling white crystalline stone composed of a thousand octagonal sub crystals, glowing and shimmering and casting a million reflections around the isolated pockets of deep stone they are found in. The crystal breaks easily if handled, but is firmly rooted to the rock from which it emerges. A tingle goes through your fingers when handling the crystal and its pieces, although after a minute or so the glow fades from pieces broken off, and they become inert quartz.

If these crystal bits are eaten they can bestow blessings to the lucky or dire curses to the unlucky. If characters go ahead with it, they should roll a d20 for the following effects:

01: Character takes 1d8 pts of damage as the chip bursts out of their mouth and grows into a small Earth Elemental (1d4+2 HD) who will attack the party.

02: Character is blinded for 1d6 hours as their eyes temporarily become crystal spheres. If they are slain in this condition, the eyes remain crystal, and are reputed to be sought after by evil wizards and/or marble aficionados.

03: Permanent +1 to Strength, as your skeleton becomes a stonelike material. Gain 20 pounds of weight (and encumberance) permanently.

04: Permanent +1 to Charisma, as your teeth and eyes take on a beautiful, diamondlike shine.

05: Gain a +1 to Constitution as your tissues become harder and more durable. Thieves suffer a 5% penalty to Move Silently as the character crackles and crunches slightly when they move.

06: Permanent +1 to Intelligence, as bits of your brain become a crystal matrix that functions like a supercomputer. One downside, you tend to have trouble navigating non-angular spaces.

07: Gain +1 Armor Class as a lattice of octagonal crystal scales cover your skin. These scales are transparent, and are only noticeable when viewed very closely.

08: Permanent -1 to Strength as you are racked with pain from crystal growth in your bones.

09: Permanent -1 to Charisma as strange crystalline growths break out across your body.

10: Permanent -1 to Intelligence, as bits of your brain petrify. This affliction makes you repellant to mind flayers.

11: Character's digestive system is permanently altered so that they cannot eat normal food, but must consume earth and stones for sustenance. Warning, certain minerals are still poisonous!

12: Bestows Improved Invisibility for 1d6 hours in areas of natural stone. This effect is lost in areas of worked stone or other materials.

14: Crystal chunk transforms into a 500 gp Alexandrite in the character's mouth.

16: Character can speak the secret language of rocks for 1d8 hours. This can be used to learn many things if the right stones are asked, but they're also treated to constant griping about erosion and lichens.

17: The victim's skull becomes thick and stone-like for 1d4 hours, reducing character to a blithering idiot with a bad nosebleed and an Intelligence of 1.

18: Gives a special 1d8 temporary hit point bonus. Once these are lost, the character only heals up to their normal level.

19: Character is turned to crystal. Roll a Save Vs. Petrification to avoid.

20: No effect. Tastes salty and tingly.

The brave, or foolhardy, may opt to eat multiple pieces of Sovereign Crystal, and gain whatever good or ill effects it would bestow, but for each piece past the first, they must also make a save vs. Petrification, with a cumulative -1 penalty, or else turn into stalagmites.

Earth Elementals created by the stone that are not slain will stick around, guarding the mineral deposit faithfully and becoming a terror to local delvers. There is a 10% chance that 1d4 of these creatures are lurking about when the Coins of the Earth Lords are first discovered.
Posted by BigFella at 5:20 PM