With barely pause before the final strains of Auld Lang Syne faded, we were back around Paul's gaming table with our dice at the ready.

In particular, I was ready with an awesome dice my bro gave me for Christmas, that lights up when you get a natural 20! Sweet! 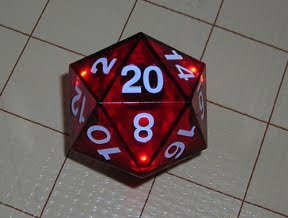 Sadly, I didn't get to really use it this session, as it was mostly careful exploring of the vacated interior of Skull Mountain.

Yeah, Skull Mountain. Having not been masticated enough by this hideous warren of deathtraps, we now stood at the mouth of the skull ready to go in and make a thorough exploration, which we did.

I don't need to go over the particulars, mostly what we did was map out an accurate picture of the lower levels, assembing our three half completed maps from our prior forays into a cohesive whole.

We applied the 10' pole liberally, and avoided all but one of the pit traps, which caught Kashim for a some minor damage. We also managed to neatly evade an arrow trap that guarded what seemed to be a map room, by spotting it's trigger and firing it off while nobody was in its sights. We made note of where the arrow hit on the map. (Paul, you ABSOLUTELY have to put something cool there! Rule of cool demands it!)

The only real trouble we had was when we set off a rolling boulder trap in one hallway that was hidden behind a door. Hearth and Half-Klint, our new halfling theif, both got crushed up pretty bad, but the Deacon healed them (what can I say, it's tough being 1st. level). Then there was the secondary effect of a bunch of Indiana Jones jokes, which we mostly avoided. 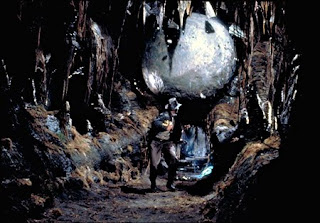 It's an occupational hazard in this biz...

Finally, we made our way down to the counting room/scrying room/aaghthestatue'sbreathinglavaonus level, and hied ourselves to the scrying pool. We got a LOT of info out of that. 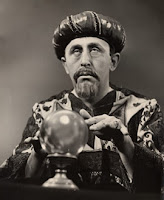 Turns out, the way the thing works is if you drop some liquid from the black flask into the pool and think of something or someplace you've seen before, a vision of it appears in the pool. We found that stuff we hadn't seen, like treasure from the list we found in the counting room or Prince Gway, wouldn't show up. (As well as completely imaginary things, like a hobgoblin posing as Prince Hank.) So we lined up our priorities and took turns tuning in the Scrymaster 2000.

Restenford was wrecked up, and the castle was under seige, which we knew as players but didn't know as characters, so that was good dot connecting. We saw a lot of undead shambling around, which wasn't a good sign. (Although at my level I'm getting so if it's less than, say, a ghoul, it's not much of a bother. Frikkin' ghouls...)

Bridgefair was still standing and was thus far unattacked, but it looked like the forces there were busy building up fortifications.

Pelltar was at some kind of wizardly meeting with a bunch of high and mighty types. We spotted heraldry of a gold griffon on white and blue in the background.

Tevlar turned out to be at the same meeting, which I guess isn't that big a surprise since the guy mows his lawn (and by lawn, I mean a castle courtyard swarming with skeletons and zombies) with fireballs. This led to a larcenous gleam in the party's eyes, since if Tevlar was out at this big mystical Shriners convention his castle was unoccupied... 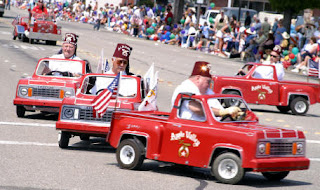 Shriners are awesome, btw, and I mean that totally un-ironically.
We tuned in on Tinhelm, and saw he was living it up in some tavern that Kashim recognised from his bar crawl of Bridgefair, no doubt on the ill gotten profits from OUR horses. So perhaps a little track and smack would be in order for our shiny hatted former employee.

Once we'd exhausted our options with the Scry-o-mat, we decided to go back to the skull shrine (the one with the idol/statue that nearly tpk'd us.) and check around. We closed out the session standing before the deadly carven lizard man, stroking our chins and pondering its mysteries, trying to figure out whether they could be plumbed without it coming alive and kicking the crap out of us.

So a good, methodical session, more about exploring than action. Thanks to Half-Klint's grabby little mitts we got a little bit of XP out of the glowing candelabra in the room where we'd found Belarus Beechson (returned safely to the shrine of the Good Earth in Greenwild), The Prince (ironically killed by lava), and caravan guy (mauled by giant wolves). We also got a little XP bonus from avoiding the arrow trap at the map room so deftly. Better than a peck in the head with a sharp stick, as my Dad would say.

If we could clear out the stank of evil from this place, it would make a pretty awesome fort, but that's a tall order. Right now, I think we just wanna cash in and move on to greener (or to be honest, golder) pastures.

Thanks again to Paul for running, and a tip o' the hat to the rest of the 10d gamers for another solid session.
Posted by BigFella at 11:44 AM