LL at Paul's: Madness in the Streets

So I finally made it to a session when we had a brief interstice of not snowing.

We catch up to our heroes debating the merits of turning Tinhelm over to the New Haberdashers as revenge. As a lawful character, the Deacon kind of has a problem with this. Sure it was lame that he stole our horses, but I'm not sure I'm comfortable turning a guy over to a bunch of thugs so they can get medieval on him.

The debate got sidelined as a tumult erupted outside the Pikeman tavern where we'd gathered. We looked out side through an unusually dense fog and saw a bunch of guys going at it hammer and tongs in a knock down, drag out fight.

Ketil, our paladin, used his Detect Evil ability, and noted sort a general malaise of evil floating in the fog itself. So we knew something was amiss.

The Deacon cast Protection From Evil on himself and headed over, along with Ketil to try to break the brawl up. One guy had pulled a knife and was shanking one of the other dudes, so we figured we should intervene.

Hearth, our elven wizard, stepped out of the front door and cast Sleep on the crowd. Thankfully, the Deacon was too high level to get caught by it, and Ketil made his save, so all the other brawlers got sent off to dreamland.

Ketil started dragging one of the combatants back toward the inn, while the Deacon decided to head up the street and investigate the fog cloud.

Unfortunately for both of us, the fog apparently contained concentrated essence of crazy, 'cos we both failed our saves and flipped out. Ketil drew his mace and crushed the guy he was trying to rescue's head, while the Deacon started swinging his mojo stick over his head looking for someone to brain with it.

The rest of the party realized the crap that was going down, and drew up plans to retrieve us. Frog tied a rope around his waist and headed into the fog, holding his breath after a deep gulp of air. Marklov rushed inside and grabbed the bellows from the fireplace, filling it with an emergency air supply then rushing out to join our veteran merc. Kashim took a mighty breath, also tied a rope around his waist, and charged after the Deacon into the fog choked street.

Thankfully, Frog managed to disarm Ketil, but still had to face his furious pounding fists as he tried to drag him back to the inn. Kashim took several regrettable blows to the face and head from the Deacon's feather and skull festooned staff (the mummified squirrel lashed to the top probably hurt the worst) but thankfully the cleric was too loopy to remember to fire off the "breeshk" BOOM attack. The desert warrior grappled the wild eyed Deacon and started dragging him back.

Marklov, Frog, and a struggling Hearth managed to pull Ketil back to the inn and into the common room, where the poor elf took a heavy blow to the face that knocked his delicate nose out of joint and laid him out flatter than a mackerel. Tables were smashed, spittoons were emptied in peoples faces, and wrestling moves were attempted, until finally everybody came to their senses.

Meanwhile, Kashim was valiantly trying to drag a wildly stick flailing Deacon back to the inn, when finally his lungs gave out on him and he took a breath of the fog, succumbing to the rage and starting to punch back. So instead of pulling him in, he became kind of like a savagely brawling fishing lure for the Deacon, who chased him and continued whaling on him. When they were within reach of the inn, they got dragged inside, and finally pacified after a few more busted chairs and facefuls of gravel being tossed.

While all this was going on, Half Klint decided to climb to the roof and scope things out. He spotted the fog's epicenter a few blocks away, and in a completely ballsy move that earns him the President of Awesome award for the evening, he followed the evil mist, leaping from rooftop to rooftop until he came to a dilapidated house where the fog was thickest. Taking a breath, he climbed down into one of the upper windows and proceeded to explore the house.

Inside, it was empty, with rickety floors that gave way even under a halfling's weight. He followed the fog down to the basement, where it was streaming up through a grate in the floor. He took a brief pause where he climbed to the roof to get some more air, then went down and in a feat of halfling might ripped the grate up with his bare hands (and an awesome Open Doors roll).

He tied off a rope and climbed down to where he found a bubbling cauldron producing the evil fog of hate. He kicked out the fire, and set to work trying to upend the thing, but it proved too heavy for him (and natural 6's on his Strength check weren't forthcoming). After straining with it for a while, a couple of hooded, robed figures with their faces heavily wrapped came in to investigate, and nearly caught him as he scampered up the rope and got out of there.

The brave halfling made his way back to the inn where the rest of the group was convalescing with his news, and so we decided we should go and deal with these cultist bastards. We cut down some curtains and wetted them, making impromptu gas masks for ourselves, and set off to check out this wrecked house.

We climbed in thru the first floor window Half Klint had opened for us, and made our way down to the basement, then climbed on down into the room with the cauldron. This we poured out on the floor, careful not to get any on us, and proceeded to explore thru a couple of doors we found down there.

Our way eventually led to a room hung with spare robes, which we took to disguise ourselves. (Even Half Klint, with full expectation of a few "Aren't you a little short for a stormtrooper?" jokes to try to evade.)

As we were doing this, Ketil found a crack in the floor which looked down into some kind of sepulchre, where a bunch of cultists were busy doing the usual culty stuff.

A brief debate ensued as to whether we should go in guns blazing or GTFO. On one hand, we were out of spells and all pretty battered from our little internecine brawl, on the other, if we left then surely the next day when we showed up with the town guard the place would be an innocent ice cream parlor or something. We decided to split the difference and just scope the place out.

Appropriately berobed, we pressed on, 'til we came to a room with a couple of cult goons standing guard. I'm not sure I remember what set us off, whether they asked for a password or something, but we jumped 'em.

They managed to get a "Help, intruders!" call out before they both went down, but thankfully we were able to bluster our way thru, dressed as we were, when a couple more cult goons poked their head thru the door. Thru some divine providence they bought it and went back downstairs.

So we wedged the two goons' bodies under a spiral staircase leading to a different empty house on the surface, and went downstairs.

When we came trooping down the steps, the two cult goons at the bottom looked at us askance, but seemed accepting enough, until Keitil the paladin opened his big yap and started asking "So remind me again, who do we worship here?" (This was on a par with my paladin Calvert's famous "Meow! Meow, I say!" incident back in the old Thursday night campaign, for those of you out there reading who recall.)

Well, that's when all heck broke loose, and the rest of the cult, which totaled four guards, three acolyte/low level clerics, and one high level cleric came at us and we started fightin'.

The cult boss lead with Animate Dead, and called down a bunch of skeletons from the various biers that lined the walls of this chamber. Meanwhile, we were laying into the door guards pretty well, and had 'em down pretty fast. Frog's player seemed to have pretty hot dice tonight, and was rolling a lot of natural 20's.

Then the cult leader uncorked with Hold Person, which caught Frog and Kashim, freezing them in place. Bad deal. So the Deacon used the last precious Cure Light Wounds spells on his backup scroll to bring 'em back to the land of the moving. One of the lesser priests cast Fear, sending Half Klint scampering away for his life. This was fine, though. He'd already proven himself the King of Nuts & Balls for going alone to the site of the evil fog earlier, so we figured we'd just collect him later if we lived.

Once the crew was back and limber, the Deacon used his 5th. level mojo and turned the cult leader's skeletons with ease. I got gumption, skellies ain't nothin'. Of course, that made the bastard whip up an Enchant Weapon spell on his warhammer and charge us.

He managed to kill poor Ketil with a blow to the head that caved in his face. This enraged Frog, who speared him thru his evil heart. All thru the fight, he was taunting the Deacon about hiding behind warriors. Way I see it, that's their job, and you can ruminate on your bullcrap while they're shoving your face into the belt sander in whatever hell you've been sent to, mister culty, I'm still here with my silver stringed mandolin livin' the good life.

So when the dust had settled we were down a paladin, and up one more cult on our trophy wall. Some of us carried Ketil off to the local temple of Palinthor, while the rest of the group stuck around and looted the sarcophagi in the center of the room, which apparently held a lot of phat lootz.

And that was where we left off.

This was a fun session. The interplayer brawl was hilarious, although painful. Kinda dangerous too, 'cos old school B/X style play doesn't leave a lot of room for striking to stun rather than injure. I was whaling on Kashim a lot, but figured I could patch him up.

The loss of Ketil was bittersweet, but an appropriate end because his player is going to be leaving us to move to the West Coast, and so it was a pleasure for Paul to kill his character one more time. Paul gave him a hand bound copy of my game reports from this very blog, which is pretty cool (and very flattering to me as well, if I may indulge my overinflated ego a bit. Hey, it's my damn blog!)

Once again I gotta tip my hat to Half Klint's player for bravery above and beyond the call of duty for checking out the source of the fog all by his l'il lonesome. That was a very ballsy move, and I was on the edge of my seat watching it play out. (While we were all playing Fight Club back at the inn.) So I give you the first ever Saturday Night Sandbox Damn Manly Slacks Award for bravery. 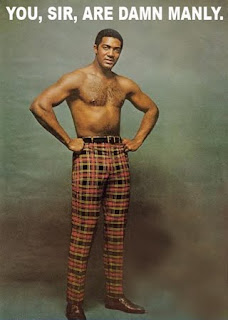 Thanks again to Paul, for running this show, and to the 10d gamers for making it fun as usual.

Happy trails and good luck to Ketil/Jantz/Yøgund's player. See you at GenCon, buddy!
Posted by BigFella at 3:24 PM