LL at Pauls: Barging out.

Whoa. Better get around to the weekly game report before its expiration date rolls around. I've been busy getting stuff ready for this year's fabulous Helgacon and thus let my blogly duties slide.

Anyway, when last we left the group we were taking care of business while the Deacon rested up from his round trip to the great beyond.

So this ended up being mostly another session of in town errands and haggling with various worthies about the city of Bridgefair.

On the monetary front, we found a buyer for the looted suits of Ilmorian armor, which netted us some good coin. We invested a fair amount of it into buying a sufficiently precious gem for the next time we might need to raise someone from the dead. Kashiim used his southern desertlander haggling skills to talk the merchant down to a reasonably bargain price.

We also got the chainmail and mace back from Alric, who figured out that they were pretty low level enchanted, +1 at best. Not bad for gearing up a hench, which is my suggestion. It's party property, so they don't get to keep it, but it helps strengthen our offensive line.

So on that subject we set up in The Pikeman (which is apparently part of a chain, like a fantasy Applebees. Try their +1 onion blossom!) and announced we were recruiting.

We got three applicants. A twitchy little thief guy who referred to himself as "The Sculptor" because he was "good with his hands", a wizard who talked with a thick German accent and could do Shield and Ventriloquism. (Available for "pahties, veddinks, and bah mitzfahs"), and a stout dwarf armed with pike and platemail (I think). As amusing as Gedenka (I think his name was) vould haff been to haff on the pahty, we vent... ahem... went with the dwarf and said thanks but no thanks to the others.

So the dwarf, who's name eludes me right now, had a question when he signed on. Namely, what was our next mission. We had to demur on answering that right away, although we did have one bit of business which was to deliver 100 gp. to the head of Palinthor's church in another city, as payment for the Neutralize Poison that had to be done on the Deacon to get him back on his feet for good.

After that, we didn't really have a plan, although our new dwarf hireling had a suggestion. He said a group of his bretheren had gone into the mountains to find a lost dwarven steading, and that sort of thing usually implies dungeons full of treasure. So we said we'd take it under consideration.

Before we could get to any of that, though, we had another problem to solve, namely getting out of Bridgefair, which with the impending siege was locked down tight as a drum with no traffic going thru the gates.

It turned out that the only thing going into or out of the city was some barge traffic on the western river, so we hied ourselves down to the waterfront to see if we could either contract or hire on to a barge. After slipping some silver to the harbormaster, he pointed us to a barge known as The Warthog, who's captain was in need of some hands.

I'm afraid my tardiness in writing this up has allowed the captain's name to slip out of my head, but description wise he bore a strong resemblance to Captain Lou Albano, so that's what I'll call him. 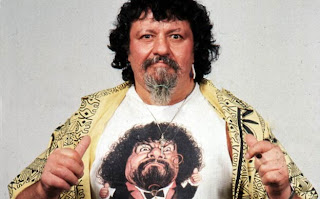 After a bit of negotiation, he hired us as muscle, offering us one silver a day in exchange for our pulling our weight on the barge. In addition, he required The Deacon to help him with a bit of a... personal problem through the offices of a Cure Disease spell. *shudder* (Well, I was glad to oblige, but true to my profession I made sure to give him a lecture about avoiding future trouble in that... area....)
Sadly, since we were trying to save money on hauling freight, we sold off our wagon and surviving draft horse, which we got a good price for in the soon to be besieged city, and gave our groom and guardsman, Garant and Darius, their walking papers. We also bid a sad adieu to our faithful guard dogs Liam and Yogund.

The barge trip itself was largely uneventful, as we poled our way up the Buckberry river. The only encounters of note were a company of mercenaries who we directed toward Bridgefair, with the encouraging word that they were probably hiring guys with their skillset down there, and passing thru a fortified river gate set in a long, Hadrian style wall that separated the human kingdoms from the wilderness' to the north.

We stayed with the barge as far as the next large town, again with a name I forget. (Sorry, Paul) where we parted company with the Warthog and Captain Lou. With our silver wages in hand, we spent the night at a comfy inn, bought supplies for an overland march, made the purchase of a donkey to carry stuff (especially all the heavy crap that seemed to be weighing Frog down), and set out the next morning heading back south. I guess you can consider it a rather roundabout trip, but it was worth it to get out of Bridgefair without having to come up with some cockamamie scheme involving hot air balloons and our Ring of Feather Fall.

When we got back down to the wall, we decided to climb up and walk along it, as it was heading in the direction of the city we were aiming for. The gate guards were a bit puzzled as to whether we should be charged the toll, but since we weren't crossing thru gate so much as walking along the wall's top, they reluctantly let us go without paying. We did have to drop a couple silver to send one guy thru with the donkey, since there were stairs on the other side of the wall and it was easier than hauling the poor beast up with ropes.

Over the next couple days we made our way along the wall, in what was a very cinematic "Lord of the Rings" style travel montage in my mind's eye. At night, we'd find one of the periodic stairs, and camp out against the wall, with two man watches. One guy would sit atop the wall for a better view, and the other would tend the fire and be on hand to wake the rest of the party up if trouble loomed. 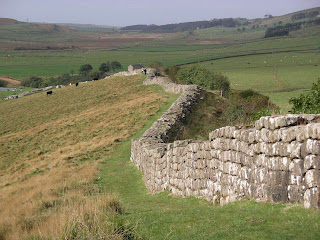 Kinda like this, but a lot larger with a bunch of adventurers and a donkey on top, and a John Williams soundtrack in the background.

It didn't really loom until a couple days into the journey. As we went, the wall got more crumbly and in poor repair, forcing us at times to climb down and walk alongside when it got too treacherous.

We were camped out at night when our lookout spotted two huge humanoids who started chucking pieces of wall at us from a distance. At first I was thinking "giants". (More accurately, I was thinking "Oh CRAP! Giants!") but they turned out to be ogres. (Perspective can be a crafty minx when it comes to spotting giants. Is that a six foot tall guy ten feet away, or an 18 foot tall guy a hundred feet away? Turns out it was somewhere in the middle of the slider bar.)

It just shows to go you how far the party has come. Last time we met up with an ogre (who was the pet goon for a bunch of gnolls) we had a really hard time. This time, though, it was a pretty low effort encounter. (Not that I'm getting cocky, mind you. The dice and a sufficiently peeved DM can make anything deadly if you're off your luck for the night.)

We got everybody woken up and armored up while the big goons lobbed bits of masonry at us. I don't think they managed to score a hit. Whereas Hearth and the Deacon settled their hash handily, with a Charm Person and Hold Person spell respectively. (Luckily, ogres are just barely within' the whole "Person" designation for both spells, which don't count personality so much as humanoidness.) So one ogre was froze solid while the other considered our elf buddy with the deviated septum his new bestest friend in the world. 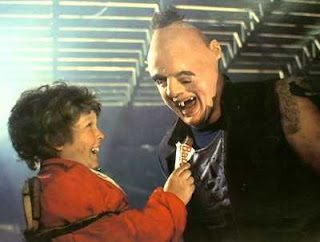 "Sloth love Hearth!"
The Held one we coup de graced with extreme prejudice. Our new goon pal, however, we need to figure out what to do with. We had him empty out his ogre bag, which was full of a load of silver and gold. He was happy to part with the loot, now that he had a new bosom chum.

And that's where we left it. If we're gonna keep this guy around we're gonna need to keep a supply of candy bars ready.

Thanks again to Paul for running an eventful game, and to the 10d gamers for another jolly good session, what?
Posted by BigFella at 8:17 AM