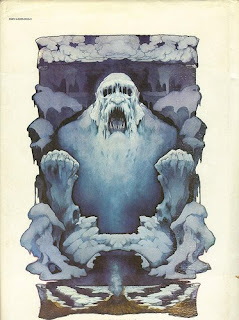 HelgaCon IV started out with an Old School bang, with my good buddy Delta storming up from Brooklyn on the heels of the big April Fools blizzard with the classic D&D module "Glacial Rift of the Frost Giant Jarl" (G2 for those who are in the know (or in the snow) about that sorta stuff.) He'd run G1 "Steading of the Hill Giant Chief" last year, but I was too sick to play, dammit.

Not this year, tho. I was charged up and ready to rumble, and we had a real rip snort of a run at the forbidding ice cliffs and frozen tunnels of the evil frost giants' home base. 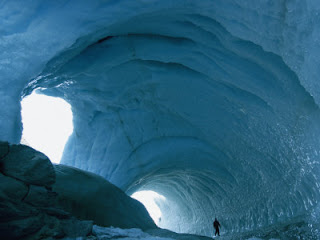 I won't give specifics of the layout and the stuff we found down there, due to the fact that that anyone into the Old School scene (or even those who ain't but who'd like a good adventure) ought to give this module and its companions a try, but overall it was an awesome session.

We settled pretty quickly into funny voices. My character, the mighty fighter Boris of Brainsk, kept up the intensity with a thick Russian accent, but the winner for hilarious dialogue has to go to our team leader and fellow fighter Mr. M's Pellinore-esque, quavery locution. (The best analog I can give is an older Peter O'Toole).

The team of six players, which included two fighters, a thief, a mage, a fighter/thief and a fighter/mage, also gelled pretty quickly as a tactical unit.

I think the best tactic we used was sending our scout, the thief Fedyeka, played by Ms. B, ahead with her elven cloak and boots to check our path, but not so far ahead she got in over her head. So my first pro-tip would be never send a scout farther ahead than their heavy support can run in a round if things go all monster shaped.

Another good use of our resources was using some elven cloaked fighters as cover for our mages if they needed to take point, rather than leaving them exposed to the giants and other ice based monsters that infested the rift.

The surprising tactical development was Mr. H's mage, who was armed with a Wand of Fireballs that he was a bit... overly keen to use. Delta had sought to make us pay for excessive kerploding by causing a cloud of blinding steam to form whenever we set one off, but a surprising tactical dividend appeared when we figured out we could use the steam cloud (and attendant slippery ground from the half melted floor) as an advantage against the complex's giant sentries, forcing them to charge us blind and giving 'em a face full of fury when they stumbled out of the mist. We were shooting +1 arrows and magic missiles and a few lightning bolts got tossed as well.

The fights were a hoot, a mixture of desperation, unintended zappings, and bad@ss giant slaying throwdowns.

Mr. M's fighter earned his sub-moniker as "The Valorous" by taking about three boulders to the head (or possibly more) thru the course of play. He was often in the lead, as referenced in my earlier comment about elven cloaked fighters as a defensive line, and he took a lot of the rocks. He stayed on his feet thru the whole thing, tho, so aside from the quavery voice he was solid steel otherwise.

As for me, I just enjoyed the heck out of hacking away at the big brutes with my magical sword Wyrdbreaker. (Which is werry hard to say with Russain accent.) I've never achieved a level thru normal play where frost giants could be considered a challenging but largely (no pun intended) handle-able foe, and it was pretty exhilerating to take the big snow goons out like we did. The battles were tense but extremely satisfying, and I think all told we racked up about fourteen kills against the forces of shaggy, walrus scented chaos. 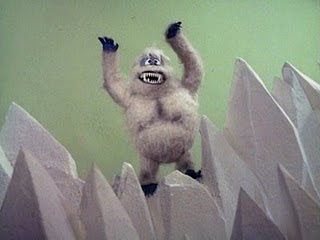 We also roasted a lot of damn yetis.
On the down side, minor though it actually was as down sides go, in terms of the tournament scoring of the game we didn't do all that well. Our goals were to A: reconnoiter and find out what the giants were up to B: explore the rift and C: kill us some giants. We did good on points B & C, but not so much on A, which were the big ticket items, pointswise. We somehow managed to avoid several of the clues linking G2 to G3 and beyond, and got fished in by some red herrings to our detriment. So I think out of a possible 1200 pts we scored somewhere south of 200.

But no matter. I speak for myself, but I think I'm in the ballpark for everyone else that we had a grand old time, and avidly look forward to next year, when I'm guessing Delta's gonna turn up the heat on us in G3 (Hall of the Fire Giant King).


P.S.: Whoot! First for reals post HelgaCon IV Blog post! Lets see you guys pick up the slack, Delta and Paul! (And any other attendees who might have a blog. Send me a link if y'do!)
Posted by BigFella at 7:08 PM