Helgacon 12 - Knights of the Star Condor: The Green Dome of the Reptozons 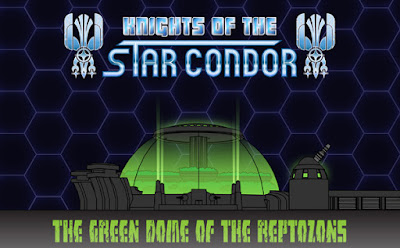 The third and final game I ran this year marks the launching point for a new project that I hope to bring to fruition as a campaign book on Bigfella Games later this year.

The Star Condor campaign world has been slowly taking shape since I first ran it at Helgacon VI and then reprized it at Helgacon XI. It's a multi-layered game experience that draws inspiration from the science fantasy of the early 1980's, the golden age of movies on VHS and syndicated cartoon series that were earnestly following on in the wake of a certain trilogy of movies about wars being fought among the stars. You know the one I mean. While it utilizes the trappings of science fiction and space opera, at its heart it's high fantasy.

The primary inspirations for the original game were the classic 1983 Parker Brothers game Shadowlord! and Delta's Outdoor Spoliation, combined with Knight Hawks rules for the spaceship fights and Labyrinth Lord for the person to person level stuff. In an effort to make the eventual product I hope to produce more my own thing, I'm moving away from some of those sources and adapting a lot of it to my own content, and I'm also drawing more from my good friend Delta's expertise, by making the game compatible with his excellent OED ruleset for OD&D.

I should pause here with a hearty thanks to Delta for all the advice and feedback he gave me in developing this adventure, as well as for the cycles yet to come as I mold this thing into shape. Usually when I'm putting together a game for Helgacon I'm hunched over my worktable laboring away without any guidance until I lay it on the table at the con. It was a rare treat to be able to collaborate with someone so knowledgeable and cool. So yeah! You're awesome, Delta! :D

On to the game itself, I had 3 awesome players. (I would have had 4, but unfortunately one of them had to stay home due to his kiddo being sick with the flu. Hope everybody's better now, Mr. G. :-\)
I also had a surfeit of characters, preparing 24 of them. 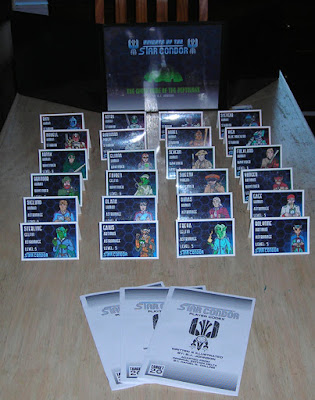 So everyone selected a primary and a secondary character to play. Starriors, Wayfinders, and Astromages map pretty closely to OED's triad of classes of Fighters, Theives, and Wizards. (Although Wayfinders are more akin to explorers and pioneers than rogues.) So we had a nicely balanced party. I'd also prepared handout booklets to introduce my players to the new races and technology I'd introduced. 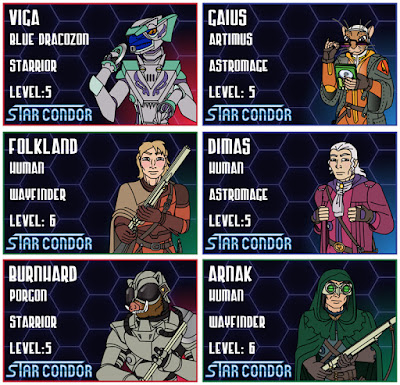 Their mission was to land on an isolated ice planet to track down and capture one of the most notorious leaders of the Shadow Imperium, the black dracozon Count Gwyth. I gave them the following briefing materials: 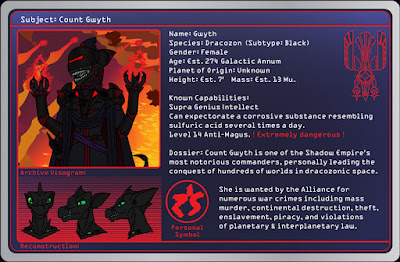 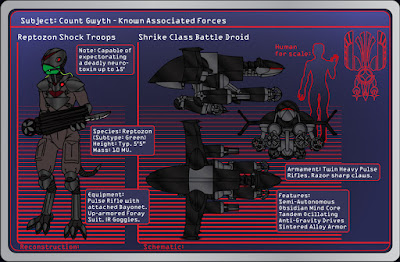 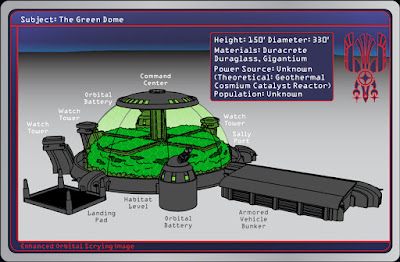 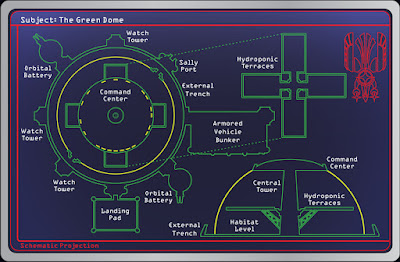 Due to the danger to their starships from the installation's orbital defense lazers, the plan was to put down over the horizon and approach the Green Dome using Planetary Excursion Transports.

As their vehicles, the Badger and the Otter, bounded across the endless ice plains, their scanners picked up enemies approaching to intercept, a squad of Shadow tanks trundling across the frozen tundra. The Wayfinders at the controls of both transports kicked it to full throttle and the battle was joined. 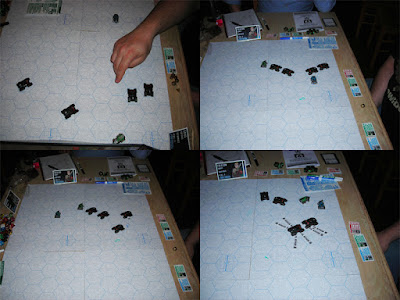 While the Shadow tanks had heavier armor and stronger weapons, the Alliance vehicles had speed and maneuverability on their side, as well as a powered shield that could soak up a fair bit of damage. They essentially ran rings around the tanks. 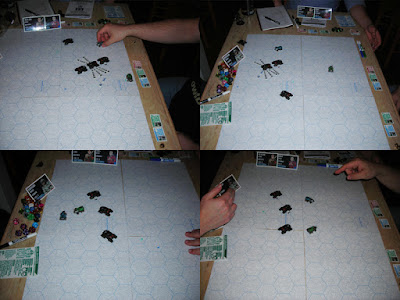 At one point, the first Shadow tank that was crippled fired in frustration on one of its own side. This precipitated the crews of both tanks to pop their hatches and fight it out on top of the smoking hulks. It was revealed that the enemy armor was crewed by hordes of stunted, cold adapted White Reptozons. The Astromage Dimas took advantage of the confusion and launched from the Otter wearing a flight harness, flying over the squabbling tank crews and dropping a Fireball spell on them. 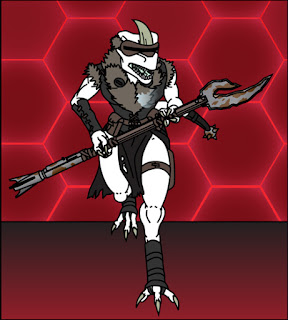 The survivors retreated into the still functioning tank, turned tail and fled. And it wasn't long after that the two hurtling Alliance transports had done enough damage to the other tanks' vital systems that two were disabled and one was quitting the field as fast as its gigantium treads could haul it. The Otter and the Badger double team pursued the last fleeing tank and enfiladed its turret with blasts from their pulse guns, rendering it harmless. 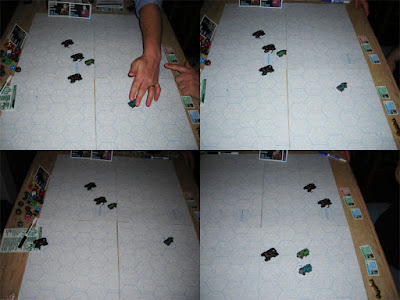 The final talley, as witnessed here on my tracking card for the bad guys, was a destroyed engine, a destroyed cockpit, two destroyed ravager cannons, and damage to the crew compartment and drive treads. The mission team rolled on.

Arriving at the Green Dome, they blasted their way inside the tank bunker, scattering the white reptozons who lurked among the junk and engine parts scattered about within. Using one of the tank boarding hatches as an entry point, they made their way deeper inside the structure.

Making their way down the trench surrounding the dome, they used a spell disk with the Passwall spell to create an entry point, with large gouts of steam issuing forth as the tropical air inside met the freezing atmosphere of the ice planet.

Using that as a potential feint against any occupants of the dome, they headed toward the southeast orbital defense tower, where they repaired and suborned a malfunctioning battle droid unit they found on the first floor using a combination of a Wayfinder's knack for repairing devices and a Charm Machine spell cast by Gaius the artimus. 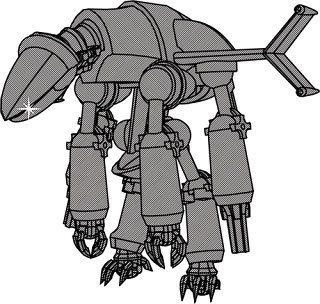 After they'd hacked the defense tower's computer systems and disabled the guns, they returned to the dome and made their way inward. As they crept through the dense jungle inside, buzzing with millions of insects and the unknown cries of other lifeforms, those among them with a bit more sensitivity to psychic impulses received a distress call from some unknown source: 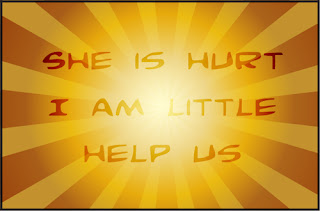 Mystified and curious, they followed the call to a large ventilation duct in the forest floor near the central control tower. It was easy enough for them to open one of the panels and make their way inside. Once they had climbed down into the underground vent corridors, they found something extraordinary. 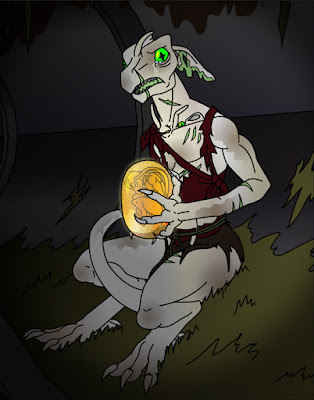 It was a dracozon, but the likes of which no one had ever seen, with a silvery sheen to her skin beneath the layers of bruises and grime that covered her. In her claws, she clutched something even more incredible, a gold dracozon egg. These mighty progenitors of the dracozons had been extinct for well over a millenia.

They assured the poor creature that they meant it no harm, but had difficulty gleaning any information from it, for its lyre bones, the complex vocalizing organs that the dracozons use to speak and sing, had been completely shattered. With considerable difficulty and apparently great pain, she managed to whisper the name "Gwyth", indicating herself as she did so. Another mystery, was this wretched thing actually the fearsome Shadow overlord they'd been sent to apprehend?


As they led the battered dracozon up out of the vent tunnel, an ominous hush fell over the jungle around them, and suddenly they were barraged with a shower of poison spittle, as a savage mob of green reptozons leapt down from the trees and attacked. 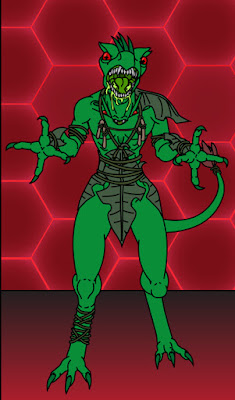 A furious battle ensued, but soon the feral creatures were routed by the Alliance heroes' spells and firepower. They led their charge to where their vehicles awaited and secured her and her precious treasure in the detention pod aboard the Badger.

They then made a second foray into the Green Dome, targeting the other orbital defense tower so that their ships could safely approach for a pickup. After beating back some stiff resistance at the entry port from a rabble of white reptozons defending a creche enclosure on the bottom floor, they disabled the second tower's systems and then returned to their transports to roll them out onto the ice fields for pickup, leaving the Dome behind them.

They got Gwyth's story after they'd cleared orbit, having furnished her with a keyboard and tablet. 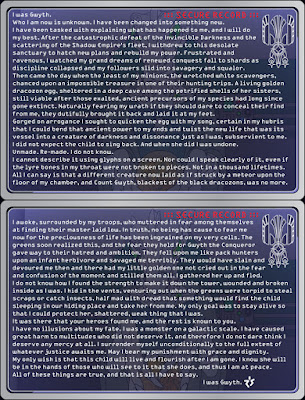 Dracozons are an all female race that use magic, also known in this universe as the Prime Harmonic, to alter and improve the genetics of their eggs. Gwyth had attempted to distort the gold dracozon egg to her own evil ends, but had instead been transformed by it into a creature of harmony. Even her acidic spittle had been changed into a substance that could heal.

After the expedition had delivered her to Alliance and Blue Dracozonic authorities, there was considerable debate as to her final fate. She was a war criminal and a scourge of civilized space, but she had bonded with the egg and a return of the gold dracozons would be a boon to the free peoples of the galaxy. It was eventually decided that Gwyth and the egg would be quietly retired to a garden world under guard, where she could raise the hatchling in safety.

A while after they had performed so well on their daring mission, the members of the extraction team received this secure holovid card. Hoo boy, did I take a big chance with this adventure, namely creating a plot thread that I was very invested in seeing play out at the table. There were a million ways that things could have conspired to not have it turn out how I wanted. Take note, GM's out there. The phrase "Turn out how I wanted." is extremely dangerous when you're trying to get there via random dice and player choice. I just couldn't help it, when I figured out Gwyth's heel/face turn, I had to roll with it.

But bless their noble hearts, my players chose characters that were sensitive to little Theen's psychic signal (basically if they had a Wisdom bonus, or were a dracozon), and they made a beeline to the exact spot where they would pick it up.

So yeah, I'm thrilled with how it came out, 'cos I got to tell the story I wanted to tell. I count myself considerably lucky that it came off.

Otherwise, I think the tank battle at the start could have been snappier. There was a lot of learning the rules and strategizing, and I could have had the enemy tanks blow up easier, but that's not a major problem. The players were having fun, and it all fit into the 4 hours allotted so c'est la guerre.

Delta's advice came in extremely handy for the fights with the reptozons, which were essentially a zerg rush style foe. He gave me some invaluable tips that kept those fights from bogging down.

So yeah, I was really happy with the way this game worked out. And I'm excited about the Star Condor game and campaign guide. Stay tuned and watch this space, and Bigfella Games, for more info as it happens.