It was the Monster Mash.

As promised, here are the custom Labyrinth Lord classes I had on hand for my frightful Halloween dungeon crawl. I figure I oughta get these up before we're too far along toward turkey time, and monsters, pumpkins, and wads of candy are too far in the past. 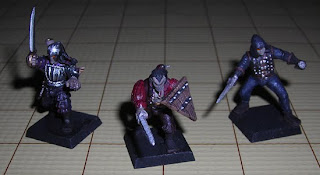 The blood of the dampyr is a strange mingling of human and vampiric bloodlines. While mortal, they possess the rudiments of a vampire's power. They are cruelly handsome folk, with pallid skin and feral eyes. They may fight with any armor and weapons, and may also cast spells like a magic user. Their supernatural background grants them 60 ft infravision, as well as uncanny senses with half the range on a surprise roll (i.e. if surprise is on a 1-2 on a d6, it is only on a 1 for a dampyr.) Dampyr are uncomfortable in daylight, and suffer a -1 penalty to all rolls made while in direct sunlight. They may be turned by a priest as an undead of their level, but are allowed a save vs. wands to resist this. They are immune to the paralysis effect of ghouls, as well as charm and sleep type effects.

Upon reaching 9th. lvl, a dampyr may establish a stronghold, usually in a remote, moody castle overlooking a village of fearful peasants, who count themselves lucky that it's only a half vampire occupying their neck of the woods. Dampyr may hire soldiers of any race, although they do not generally trust other dampyr.

NOTE: DAMPYR use the ELF experience and saving throw progressions from Labyrinth Lord.

Furtive, grimy little lurkers in graveyards, catacombs, and dark alleys, grimlings are distrusted by most, but their willingness to do any task, no matter how vile or menial, means they fill many niches at the edges of society. A typical grimling is 3-4 feet tall, and prefers to keep their face hidden by wrappings and deep hoods, from which red eyes glitter. A grimling's wiry, ape like build allows them to climb as if they were thieves of their level. They have an uncanny ability to vanish in graveyards and ruins, hiding with a 90% ability. They are also able to hide in shadows on a 1-2 on a d6 if they hold absolutely still. They have keen senses of smell, especially when it comes to finding dead bodies, so they will find a corpse (dead or undead) on a 1 in d6 if there is one to be found. Due to their short stature, and skill at ducking when they've made themselves enough of a nuisance, they gain a -2 to AC when fighting foes larger than human size. While short, they are immensely strong, and can use large or two handed weapons with ease, and may wear any armor.

Upon reaching 9th. level, a grimling can establish a community of their kind in a suitable graveyard, tunneling out a network of subterranian passages and chambers and ruling this territory as an underlord. It goes without saying, aside from certain eccentric necromancers and other humanoids, only grimling would want to take up residence there, let alone hire on as soldiery.

NOTE: GRIMLINGS use the HALFLING experience and saving throw progressions from Labyrinth Lord. 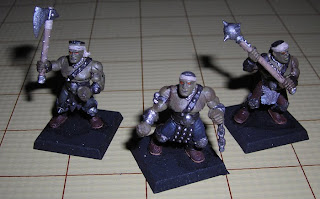 These hulking creatures are not born of nature, but are instead the work of wizards, alchemists, and other dabblers in forbidden knowledge. A homanculus is usually over six feet tall and powerfully muscled, with drab green skin and red, sunken eyes. A homanculus cannot wear armor, but they have a natural armor class of 5 from their tough, leathery hides. They can, however, carry shields. They have 60 ft. infravision. A homanculus is very easy to resurrect from the dead, requiring only the application of a cure spell and a lightning bolt. Their unnatural origins make them outcasts from most societies, and therefore they suffer a +2 to reaction adjustments, and cannot hire human retainers.

Upon reaching 9th. level, a homanculus may choose to adopt an area to protect or terrorize (depending on their alignment) up to a single map hex in size. This territory will always be in a wilderness area, generally rather remote. All natural animal life in the hex will befriend the homanculus, serving as their eyes and ears and giving what aid they can. Lawful homanculus tend to get on well with deer, rabbits, squirrels, and birds, while Chaotic homanculus will generally befriend bats, snakes, wolves, and toads. Neutral homanculus may befriend any animal they wish, as long as they don't pet them too hard.

NOTE: HOMANCULUS use the DWARF experience and saving throw progressions from Labyrinth Lord. 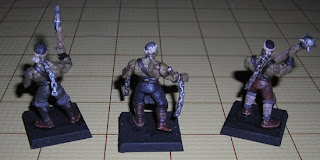 The entirety of these classes are hereby designated as Open Game Content via the Open Game License.
Posted by BigFella at 8:54 PM