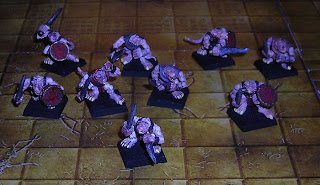 Adventurers and wayfarers are advised to tread lightly in the scattered tombs of the ancients, lest they fall afoul of the terrible tomb rats, who jealously guard their mouldering larders.

Resembling a pale, stunted hybrid of man and mole rat, these creatures dwell in deep tombs and burial complexes, always digging, always gnawing, scavenging for morsels of dead flesh to feed upon. Those that live in deeper catacombs have often feasted well on the mummies interred there (referred to as "spicy food" in their language, which is a debased, simplton's patois of the ancient tongue), causing them to grow large and strong. There are whispers of truly monstrous specimens in the deepest tombs, grown to grotesque size on the meat of dead kings and sorcerer priests, so large they cannot leave their feasting halls, ruling over their smaller kin as corrupt sultans of decay. They possess infravision out to 90', and their eyes glitter like greedy rubies in the dark depths.

The lust these creatures bear for the flesh of the dead is almost palpable, such that if any corporeal undead is outnumbered by at least 2 to 1, then the tomb rats can perform the equivalent of a Turn Undead as a cleric whose level is equal to their hit dice. Tomb rats are immune to mummy rot, level drain, and the paralyzing touch of ghouls. Their word for the undead is the equivalent of "running food" in their chittering language.

While they prize the contents of the tombs for their feeding, they are perfectly happy to slay interlopers and "put them up" for later, as it were, for to a tomb rat the ancient art of embalming is equivalent to the preparations of a gourmet chef. They consider the contents of canopic jars a delicacy, and will greedily bargain buried fortunes for them.

Tomb rats arm and clothe themselves with grave goods and burial shrouds, beating vessels and bowls into crude armor, fashioning shields from casket wood, and sharpening any strong metal they find on tomb stones to create wickedly sharp blades equivalent to short swords and daggers. They are ambivalent about treasure, sometimes ignoring it and sometimes gathering and stashing it for their inscrutable purposes.

A lone tomb rat is a cowardly creature, prone to flee through secret burrows and tunnels back to their brethren for strength in numbers. If captured, they may bargain knowledge of where riches are buried or what traps lay in a party's path, for tomb rats learn all of the grave's secrets in their diggings. They hate and fear the sun, and suffer a -4 to all actions as their weak red eyes are blinded and their sallow flesh burns in the harsh light of day. Even the brighter light of an oil lamp will irritate them, rendering a -1 to the creatures, although a flickering candle or torch will not bother them... much.

Tomb rats greatly fear the Kedai, suffering a -4 to morale when facing them, but share an abiding mutual hatred with the Largomani, gaining a +2 in morale versus the doughty reptiles. 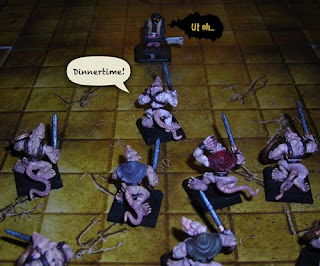