So every month, a loose confederation of Boston area games enthusiasts gathers to hang out and play games at one of the member's places, and last weekend I had the honor of hosting. I'd like to make a habit of blogging about it whenever my Awesome Chamber of Gaming is used for such a purpose.

Well, to be perfectly Frankenstien, we didn't actually use the ACG, as the turnout was rather low (2 guys, besides myself), and it was much too lovely a day to spend inside, so we took the show on the road, and went "nerding" as my compadres and I tend to call it, which is like a pub crawl except instead of pubs we hit comic book, animé, record, and gaming stores.

To keep this post on topic, we did hit two game stores: The Games People Play in the Harvard/Cambridge area, which has a fine selection of boardgames and some classic strategy stuff too, and Pandemonium Books, one of the premiere game stores in the Boston area. Also one of the last holdouts, in the wake of the closings of the much lamented Danger Planet in Waltham and Your Move Games in Somerville.

I miss Danger Planet in particular. I designed their sign, back when a good friend and co-worker was one of the founders. Got paid in a Warhammer 40k Tau army and bragging rights, which my friends probably can tell you I abused with abandon (The bragging, not the Tau).

With it gone the nerding scene in Waltham's like a tripod with a missing leg (AniMadness and Outer Limits Comics being the other two legs.) 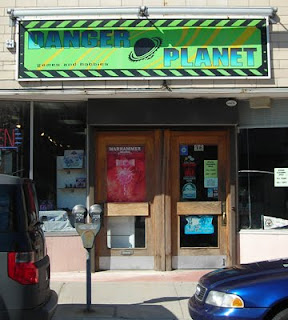 Alas, we hardly knew ye. Now it's a fishmongers...

So support your Friendly Local Game Store every chance you get. They may vanish in a puff of mildew and Magic Cards when you're not looking.

So it was a nice gamery day, all told. Just noting it.
Posted by BigFella at 6:05 PM