The Horror in the Hunting Lodge 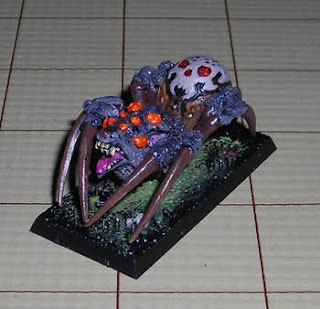 The Spider Wolf (A.k.a. Kreuzschlüsselwulf)

Truly huge giant spiders are subtle and wily in their way. An arachnid doesn't grow to the size of a horse without possessing some measure of cunning. There are some mercifully rare cases where such a specimen my overcome another, equally fearsome predator and feed on its vital juices.

Such was the case with the fearsome spider wolf, who had managed to steal upon a werewolf and its mate and entrap them with its deadly venom. Bound and hung in the spider's gruesome larder, the eight legged nightmare fattened upon the supernatural blood of the lycanthropes, finding them an ever flowing source of nourishment as their curse prevented them from expiring from its horrible ministrations. Through months of feeding on this tainted blood, the great spider changed and mutated, becoming something altogether more terrifying.

The spider wolf is an eight foot long spider with a slavering wolf's head growing from its cephalothorax. It has eight burning eyes that peer out at the world with the ravenous hunger of both wolf and spider. It is capable of spinning vast webs to entrap hapless passers by in a gossamer prison, for later exsanguination.

The most fearsome aspect of the spider wolf is its magically corrupted venom. When bitten by the spider wolf's terrible fanged jaws, victims must make a save vs. poison or suffer from a fast acting strain of the curse of lycanthropy, becoming a vicious werewolf within 2d6 turns of infection. These werewolves will instinctively avoid the spider wolf, preferring to attack their former friends and allies. They are normal werewolves in all respects, but retain their hit dice if they are a higher level than the werewolf as written in the book.

The spider wolf is affected normally by weapons and spells, but takes double damage from silver weapons.
Posted by BigFella at 6:57 PM