Once again, I am here to report on my weekly Labyrinth Lord game at my buddy Paul's.

This session was one of those sessions that was mostly logistics and long term strategic discussions. We'd lost two player characters and three henchmen in our last raid on the dreadful Skull Mountain, so there were replacements in order.

Our first order of business was seeing if we could get our veteran thief Klint raised. We had a fairly intact corpse (sans leg from an earlier misadventure) and a small ruby of considerable value for a proper sacrifice, so we hurried back to the town of Greenwild to hopefully prevail on the Temple of the Good Earth (who also make FANTASTIC bread, btw) to bring our late, lamented comrade back from the great beyond.

Well, the temple was happy to do the ceremony, since we'd struck a blow for goodness and niceness in wiping out the evil cult of the Obsidian Heart. They struck up a marathon chant, bathing the corpse in water from their recently reconsecrated holy font. After several hours, bupkus. Klint apparently didn't want to come back from whatever afterlife he'd gone to. (Or couldn't come back. He's either doing the waltz in heaven or tap dancing on a hotplate in the other place...)

The real reason for this is that Klint's player tried rolling up a replacement character and liked him better. So, the ceremony didn't work. We got the keep the ruby, tho, so all good.

From there, we got to discussing what we would try to tackle next, since we were kind of between epic quests. A faction of us, the Deacon included, wanted to go back to Skull Mountain and clear it out once and for all. An okay idea, but the High Priest of the Temple pointed out that what we'd be tugging the tail on was an evil god. Way above our pay grade, so while he applauded our intentions, the execution of our plan probably would result in a whuppin' for the good guys.

Other options were to go to Restenford and see what the scene was like, or do the same at Bridgefair, which when last we left was buckling down for a siege from the same force that knocked over Restenford.

As we plotted and planned, we also went out and ran some errands. Greenwild was kind of middle of the road between sleepy little Restenford and big bustling Bridgefair, so it had a decent selection of goods and services.

First we hit the jewel merchant, to sell off the various gems and jewelry we'd picked up along the way. After selling all the bling except for the ruby, which would be handy in the event of needing to get someone raised from the dead, we pooled up the cash from Klint's bag of holding and the stuff we'd picked up in Skull mountain and divvied it all up, with each of us pulling down about 100 gp (which using Pauls house ruled money system wherein a Gold Piece is the new Platinum Piece).

We then dug up a mage, who had kind of a hippy sounding name that I'm afraid I don't recall right now. We had him ID all the potions and magical gear we'd stripped from frikkin' Cooper and his cult. Turns out the slimeball was wearing +2 leather armor and a ring of protection, and wielding a +1 Mace with some other magic on it that the mage couldn't identify.

After some discussion, the Deacon got the leather armor and Ring, with the understanding that the ring was party property until such time as the Deacon gave up a magic item divvy the next time it came up. So now I'm up to a beefier 3 AC from my perennial 5, which is good. I'm not usually in the front row, since my Mojo Stick allows me to attack from the 2nd. rank and heal up the pointy end of the party, but still it's nice to be a little tougher, after last week's fight with Cooper and the bludgeoning we took from the lava breathing statue.

He also identified the black and white flasks. The white flask held a powder which when mixed with water gave off clouds of poison gas. So it was very much the superweapon that some of the party see it as. We'll have to think of how best to use it without accidentally murdering ourselves in the process. The black flask held a magic oil that when added to a scrying pool it was keyed to could be used to view remote locations.

This led us to make a decision on our next mission. We figured we'd go back to Skull Mountain, avoiding taking on the evil volcano god that lives there, but clearing out what lesser monsters we might find. From there we'd use the scrying pool to check out Bridgefair and Restenford and see what that haps are.

Our final errand, besides buying up sufficient vittles for the trip, was to bulk up the roster a bit. So we hit The Pikeman, a local dive where we might hire some muscle.

There we met a halfling thief who claimed to be Klint's brother. Apparently Klint was a halfling afflicted with gigantism all along. Also, apparently they both belonged to a thieves brotherhood where all the members were named Klint, or perhaps Klint was a title, kind of like Darth. Since it was all there in the former Klint's will, we had no choice but to believe him, so now Half Klint has joined the party as our thief, inheriting his "brother's" Bag of Holding, his magic hat of seeing in the dark (which now SIX men have died for), his Ring of Feather Fall, his magic Sword +1(+2 vs. Undead), and his spellbook.

Our call for henchmen brought us two applicants, an earnest Paladin (whose name eludes me) and a shifty guy in black who seemed to be all about the stabbin'. We decided to go with the Pally and give the shifty guy a thanks but no thanks. He got a little rambunctious about it, threatening us that we'd regret it. Talk to the Mojo Stick, buddy...

Anyway, that was that, and we set out again for the Dead Hills and Skull Mountain, scarce believing that we were actually going back there for another incursion. I guess accruing experience points doesn't necessarily imply learning from experience.

Our trip was largely trouble free, except on the third day when my statement of trouble free-ness was emphatically contradicted.

We were plodding along thru open country when a huge winged shape flew overhead, blotting out the sun. It dove on us with a shriek, and buried its talons and hind leg claws into one of the draft horses pulling the cart. A gryphon! Wowsers!

So we all charged in to chase it off, and it turned into a pretty epic slugfest. Hearth's Ring of Animal Control had no effect, probably because it couldn't tune in the station properly between "lion" and "eagle". I whaled at it with the Mojo Stick but kept missing like a bozo. The thing had a wicked Claw/Claw/Bite routine, and mangled up Half Klint and tossed him aside like a chew toy. The halfling scurried under a bush, vanishing from sight.

The thing also laid a pretty serious lacerating on Frog, our former henchman turned full fledged PC. We were concerned that his player, who'd also played Liam, Gentleman Jack, and The Prince, was gonna have another dead character on his hands, but thankfully his luck and armor held. I guess being mauled by a gryphon wasn't ironic enough a death for a player who's trademark is becoming death by irony. Frog getting killed off by a gryphon was only ironic in the Alanis Morisette sense of the word (i.e. not ironic in the least, and you really should look up the definition of the word before doing a song about it.) 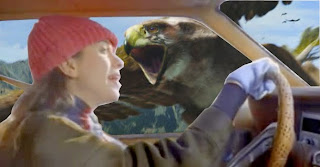 Isn't it ironic? Don't you think?
Still, we had the beast outnumbered and eventually the swords and spears of our fighters took the creature down. After we got everybody patched up and took our trophies from the creature's plume, we shoved it to the side of the road and moved on. (We probably could have eaten it, but it's hard to tell whether you should have red wine or white wine with gryphon...)

From there it was a fairly uneventful trip to the cave at the base of Skull Mountain where we set up camp. After a little debate about which approach to take, we decided to just walk on up to the front of the skull face and go in the "mouth".

And that's where we left off, standing on the platform and gazing in on the eerie stillness of the cave where so far we've taken a heavy weight beating every time we've gone in. Here's hoping for better things in 2011, since this is probably the final Labyrinth Lord session report for this year.

Thanks again to Paul for running an awesome show all year. Lookin' forward to seein' what you have in store for us next year. And I tip my hat to my fellow 10d gamers.

See you guys on the flipside.
Posted by BigFella at 3:07 PM