Creatures of the Crypt


The following are some of the horrors encountered in the Crypt of Nine Dooms by characters in my Halloween Creepy Crawl.

The grindeylow are dark, shriveled, frog like creatures that dwell anyplace pools of rancid water collect in old crypts or catacombs. While they mostly scavenge for their supper, they're quite willing to ambush the unwary and drag them down to their doom. While generally content to use their teeth that bite and claws that catch, they will occasionally make a weapon out of an old bit of wrought iron or a stout tree root, if they think it can help them get a taste of the sweet blood of those who go about in the sun.

Three times a day, a grindeylow may make a gaze attack with their large luminous eyes, blinding victims who fail a Save vs. Paralysis. The light of the sun in turn blinds them, and daylight will drive them into the safety of the dark deeps. Strange glows from still pools in the depths of the earth can be a warning that these creatures are afoot. 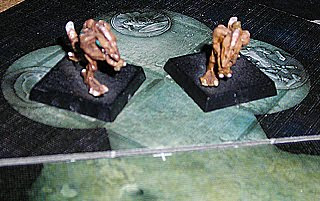 A horrible little undead construct, bone monkeys are carnival gaffs gone monstrously awry. They take the form of an animate monkey skeleton with a long tail tipped with the fanged skull of a poisonous snake, which they use like a scorpion's sting. Mad wizards and sinister mountebanks will often hide these creatures among their collections of specimens and obscure curios as guardians of their dark secrets. Their small size allows them to secret themselves almost anywhere. The method for binding a bone monkey to one's will is an obscure rite known only to a select few necromancers and carnies.

Bone monkeys are capable of remaining perfectly still until its time to spring. When a group of victims draws near, they will spring forth and grab hold of one of them, clinging tenaciously to the flailing unfortunate and stinging all those within reach with its tail. While a victim is grasped, the bone monkey shares their Armor Class, and half of the damage done to the creature is passed on to their hapless "mount". They will not let go until all those around their victim are dead, at which point they will sting them as well, and then return to their hiding place.

These monsters are hereby designated as Open Game Content via the Open Game License.
Posted by BigFella at 7:44 PM