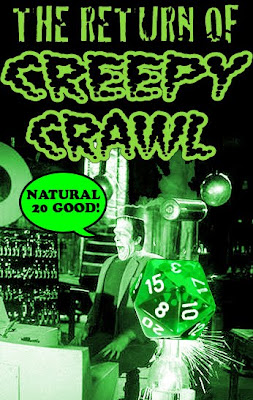 So this past Saturday I hosted my third annual Creepy (Dungeon) Crawl in my awesome chamber of gaming. I got four awesome players, and we played for somewhere around 9-10 hours, with a total of three incursions into the horrendous Crypt of Nine Dooms.

1 Homanculous level drained by a wraith and finished off by being burned alive in flaming oil/web spell conflagration.

1 Dampyr level drained then gnawed on by giant rats then finished off by his own severed, vengeful, uh... crotch...(It was damn funny but I need to tweak my creepy critical tables a bit...)

1 Grimling Henchman level drained by wraith and burned to death in flaming web spell.
(Flaming web spells were a popular attraction, although this was the same one that got the Homanculous.)

1 Magic User nearly frozen to death by Kerrictus the Coldwight, then strangled by his own severed, vengeful hand.

1 Henchman Fighter nearly strangled by his own vengeful guts before finished off by scythe wielding skeleton.

Here's the monster pelts that the PC's collected:

Plus:
6 Ghouls circumvented by spiking their chambers shut.
1 Green Slime forgotten by GM and thus avoided.

I'd have to say the play of the night was the inimitable Mr. S's stunt wherein' his magic user poured unlit oil onto the edge of a spiked pit, causing an already perforated Crypt Master who was climbing out to lose his grip and fall back into it to his doom.

Stay tuned for more aspects of the terrible Crypt to be revealed...
Posted by BigFella at 6:33 PM