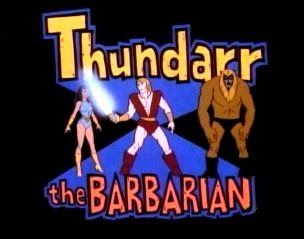 I just thought I'd take a moment to mention that Thundarr the Barbarian rocks on toast. And not just any toast, but artisan* baked multigrain toast simultaneously sliced & toasted by Thundarr's mighty Sun Sword.

My brother gave me a bunch of Hanna Barbara classics DVD's for Christmas, and Thundarr is the gem of the group. I thought it was awesome when I was eight, but it continues to be awesome when I'm about to turn forty, which is quite a feat for a cartoon show.

It's got some pretty sophisticated concepts for a kid's cartoon show of its vintage, and Robert Ridgely's always kinda pissed off delivery for Thundarr is a gift that keeps on giving (plus he's got some awesome lines).

All the Jack Kirby designs for the various mutants, monsters, wizards, and war machines make for a very distinctive look. (Although Thundarr, Ariel, and Ookla were all designed by Alex Toth.)

This obviously isn't really big news for any old school gamer types who came up in the 80's, but I am enjoying the heck out of it, and it makes me want to do something Gamma World-esque very badly. The series is pretty much just an animated version of the Platonic ideal of a GW campaign.

So check it out.

* On the subject of "artisan" foodstuffs, I'm not sure I buy this particular bit of marketing nomenclature. Are we to presume that artisan bread was forged by a breadsmith? I dunno.
Posted by BigFella at 7:32 PM