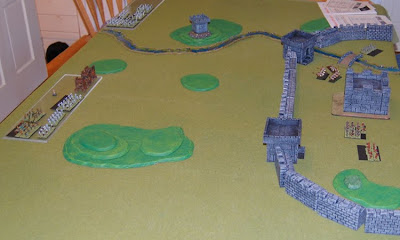 So yesterday I had the opportunity to join my old gaming cronies Paul and Delta in an awesome game of Delta's magnum opus, Book of War.

Whenever there's a city in one of Paul's campaigns, sooner or later somebody's gonna want to come and wreck it, as evidenced in 2010's disastrous defense of Restenford. This time around it was an undead army, aiming for the walled city of Bridgefair. Our forces were Paul's excellent selection of eeny meeny 10mm minis from Pendraken Miniatures.

About five members of Paul's gaming group at his job were playing the defenders, so I threw in with Delta and Paul on the side of the attackers. I also served as the session photographer.

In the end, the dead guys lost big time, being ground down from a massive wave of animated bodies to just one disgruntled necromancer, who vanished in a puff of formaldehyde vowing revenge. A greatly reduced force on the side of the living lived to fight another day. 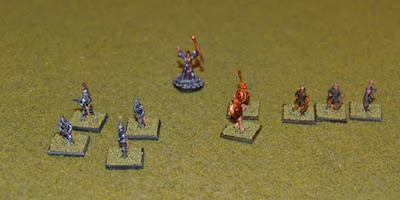 Hooray!
As usual, Delta's rules play like a charm, and we got in 15 turns in about 3.5 - 4 hours. I'll leave it up to Delta and Paul to give a better play by play, because I was really too busy taking photos to commit the events to memory.

Paul has posted his in depth account of the fracas here.

Delta's report is here. Read them! Experience them!

Thanks for running a great battle, guys!
Posted by BigFella at 6:28 PM