He comes from a shining place, he will defend our earth!
Astroman, Astroman, please fight with vigor!
Vanquish the invaders with a flash of light! Go! 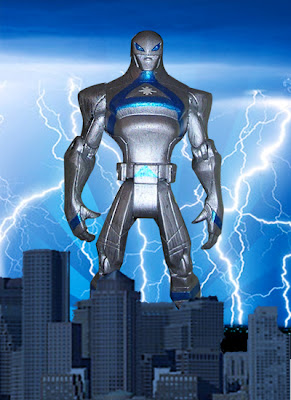 From out of Dimension A he is summoned by brave souls in their hour of greatest need. By pressing the blue button on the mysterious Astro Capsule and saying the words "Astro Activate Go!" in unison, this titan of justice may be called from another dimension for a short time to battle the monsters of chaos that encroach on our galaxy.

Astroman requires between three and seven brave souls to provide him an anchor to our world. These worthies are transported to a swirling, luminous extra-dimensional space where they are aware of each other and of Astroman's actions.

Only the pure of heart or clear of purpose may combine to summon Astroman. No evil or chaotic beings may gain his power. (Lawful or Neutral only. Only player characters may be used as components. NPC's will be rejected by the capsule's unfathomable workings.)

He appears as a towering, silvery being that can be anywhere from 8 to 50 feet tall. He may remain for as many rounds as there are mortal components who called him. He does not speak, but instead gestures and lets out an occasional thunderous HAH! while fighting.

Blindingly fast for a creature of his size, he may make as many attacks as there are components each round (ranging from 3 to 7). Components may forgo a normal attack to combine and power Astroman's special moves, the searing Astro Flash, the crushing Astro Ray, and the wily Astro Shift.

When the time limit of 3 to 7 rounds is reached, Astroman will vanish in a spiral of light and his components will manifest, unharmed even if he has taken damage. If Astroman is reduced to 0 hp, he vanishes, and his components must make a save or check (depending on rules set) or disappear with him into dimension A. If the bearer of the Astro Capsule fails this check then they appear as normal but the capsule may disappear into extradimensional space, never to be recovered.

Astroman was the star of a tokusatsu themed mini-campaign I conceived and ran about 5 years ago with my gaming group. In honor of "Pacific Rim" being so cool, I thought I'd dig out the material and post it up here on my site. Below you'll find Astroman statted out for Savage Worlds, which was the original game I used him in, and for a more generic Labyrinth Lord/Mutant Future game. Consider using him for your more gonzo fantasy/post apocalypse efforts, or stay tuned over the ensuing weeks for more of the silver guardian of peace's adventures in a mythical Japan protected by the awesome technological prowess of the Science Patrol!

Please look forward to it!

Astro Flash: If two components give up their action, Astroman may create a burst of light that all foes must make a Save vs. Wand or be blinded for 1d4 rounds.

Astro Ray: If four components give up their action, Astroman may fire a bolt of concussive force that does 3d12+1d12 per component composing his summoners.

Astro Shift: If three components give up their action, Astroman may teleport anywhere within 100' of his original location. This action may be taken on the enemy's turn, with the actions being lost on the next player's turn.

Astro Flash: If two components give up their action, Astroman may cause a burst of light that forces foes to make a Vigor check or be Shaken for one round.

Astro Ray: If four components give up their action, Astroman may fire a beam of concussive force that does 4d12 damage.

Astro Shift: If three components give up their action, Astroman may disappear and
reappear anywhere within 10" of his original point of origin.

If Astroman is reduced to 0 hp, his components must each make a Spirit check or be lost in infinite dimensions of non-space.
Posted by BigFella at 5:02 PM