A mysterious island has appeared in Tokyo bay, and it falls to the Japanese branch of the International Science Patrol to find out where it comes from and why it is here!

The crew is composed of:

Special Agent Shiro
The plucky, twelve year old
mascot of the Science Patrol.
His father gave him the
mysterious Astro Capsule for
safe keeping, before disappearing.

The team circled their amazing futuristic plane, the Jet Voyager, over
the mysterious rocky island, wondering at the strange domes, one shining
silver and one red, that they saw there. Ide detected high amounts of the
unknown Omega X energy radiating from the island.

They landed on the rocky, volcanic beach, amazed by the deep sea fish that flopped on the shore, including a few trilobites.

As they made their way inland on a winding, asphalt paved path, they were attacked by strange creatures. They were shaped like men, with rubbery, black hides and sharp, metallic claws. Where a human would have a face and forehead, they had a single, huge, glowing red eye! 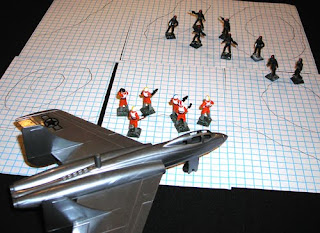 The Science Patrol defended themselves with their laser beam guns. (Except for young Shiro, who no matter how often he asked was told he was too young to be trusted with such a weapon. Instead, he used his slingshot and fired pachinko balls!)

Everytime one of the creatures was killed, the eye would rip loose from the huge socket, sprout spindly tendrils, and scuttle away into the rocks. The team started firing at the eyes, causing them to explode in red goop. Soon the strange creatures were defeated.

The team followed the path to the base of the silver dome, and found an archway guarded by two more of the creatures. With a clever, ambush attack, the monsters were destroyed.

Entering the archway, they followed a winding corridor and found themselves under the arch of the silver dome. At the center of a round catwalk, a huge spherical vessel full of billowing orange and brown mists. Something big was stirring inside. Something with a huge, red eye!

They followed another corridor, and found themselves in a control room, where a strange creature was speaking to a projected image on the screen. The creature was a beautiful, ivory skinned woman on one side, and black and rubbery with a huge red eye on the other. She wore a silver headdress with a pointed top and winglike projections, and carried a staff with a crystal on top.

The image on the screen was an old man half shrouded in shadow. Within the shadow, another glowing red eye. He turned when the Science Patrol entered, and laughed a chilling laugh. He introduced himself as Doctor Ominous, and predicted the conquest of this world called Earth by the Ominoids of Planet Jupiter. 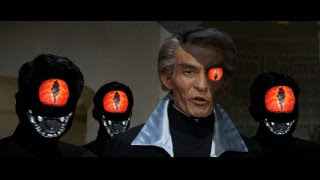 Ah! The horror!
Outraged at the intrusion, the female creature ordered more red eyed minions to attack, and used her eye and crystal staff to take control of the heroic Arashi, causing him to punch Hayata with much regret. But her evil control didn't last, and the Science Patrol defeated the menace. The horrible eye popped out of her socket, crawled into her elaborate silver hat, and flew away on what turned out to be a tiny spaceship.

Doctor Ominous laughed, congratulating them on their victory, but said it was too late. The MEGA OMINOID would now destroy Tokyo. The team felt a tremor beneath their feet, and the silver dome opened on the skyline of the great city. The island had been moving the whole time!

They ran outside, and saw a horrible, towering, one eyed beast slouch toward the hapless city. Now it was time! Shiro drew forth the Astro Capsule, given to him by his long lost father, and said the words he had been told to say.

In a flash of light, all the members of the Science Patrol team found themselves merged with the consciousness of a super extradimensional immortal being, who came to fight for peace and mankind! Astro Man! 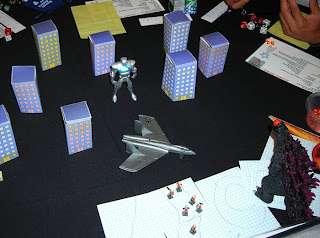 The monster lurched forward, and the fight was joined. The hearts and wills of the Science Patrol team combined to fire the terrific Astro Ray, burning into the rubbery black monster with the force of a thousand times the quasar power! The Mega Ominoid roared, and charged, and the two mighty foes did hand to hand battle. 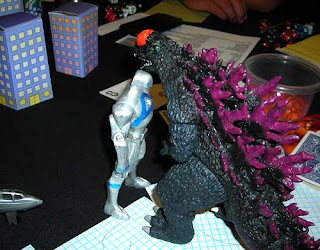 As his time in our universe was short, Astro Man combined his force to fire another Astro Beam, ripping into the creature. It bellowed, and fired its own hellish red Ominoid Beam of concentrated Omega X energy!

Taking the matter in hand, Astro Man grasped the creature and threw it, smashing a nearby, evacuated building! 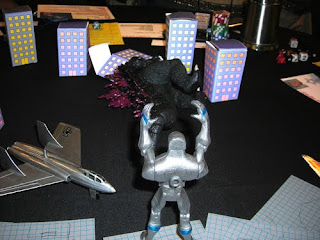 It's good! But what is this? The creature climbed to it's feet, ready for more mayhem. 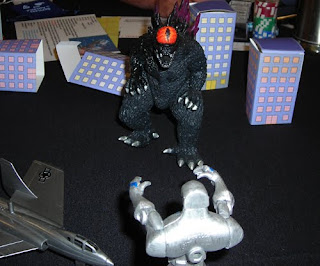 Astro Man drew in his strength, calling on the spirits of the Science Patrol for one last, desperate Astro Beam!

Victory! The creature's huge eyeball exploded in a shower of sparks and it toppled to the ground, it's gargoyle jawed head awash in eerie flames.

His work done, Astro Man vanished into the distant Immortal Universe A, leaving the stunned members of the Science Patrol standing on the street near a grove of cherry trees, which showered them in blossoms as a breeze blew in from the ocean. The Science Patrol had won! 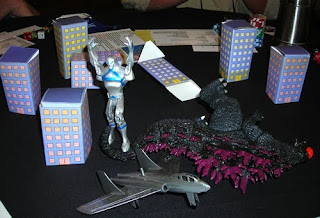 As they flew the awesome Jet Voyager back to base, Doctor Ominous appeared on their screens, bearing a dire message from space. The Science Patrol had done well, but now he would re-double his efforts. His chilling laugh rang in the cabin as his image faded to black.

Please look forward to it!