Oh yeah, and by the way, I guess I passed 100 posts the other day with my Gen Con folderol. Huzzah for Moi.

Okay, this kind of number noticing is sort of useless, so how about a short list of possible alternatives to just counting up pluses that you can use the fight normal weapon immune monsters, like incorporeal undead and such, which is riffing off of some commentary I did on a neat post at Jeff Reint's blog today.

1: Cover your body in mystic runes like Hoichi the Earless from the classic Japanese ghost movie Kwaidan. Maybe this veers close to a low level cleric spell of some kind that would allow you to fight the unfightable, like a variant on Bless, for example, but I think it's cooler if it's just folklore that works, no mage or cleric needed, you just need to be in the know. 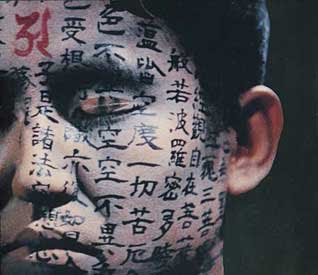 (You'll note our man Hoichi here has ears. Well... in this case the idea wasn't so much to make him able to fight ghosts so much as to be invisible to them, and the priest who wrote him up forgot his ears, so the ghosts took 'em. Attention to detail is important!)

2: Wear your clothes inside out. This or any sundry other inversions of the norm can have a powerful effect on things from or in the spirit world.

3: Attack them with stuff they have a bond to. Like swords they owned in life, childhood toys, pieces of their old house, nails from their coffin. Funerary relics and suchlike are probably a good tool for ghostbusting too. Smack 'em with a bouquet of lilies!

4: Purifying substances to prepare the battlefield. Sacred salt's another Japanese standby. Ashes from the undead critter's cremation. Paint or pigment of a certain color. There's a lot of stories from folklore about evil spirits being foiled by a handful of dried beans, or a broomstick laid across the doorway.

5: Maybe certain times of day the spirit world or negative plane or whatever is in just the right mode for you to lay a smackdown on its denizens. Or times of year. Or moon phases. This one's more about choosing when you go after them.

All told, the thing I'd stress is that these remedies should be permissible to even 1st. level shmoes without 2 copper pieces to rub together. Non-stabbable monsters should force your players to use their brains rather than just engage in a numeric arms race.
Posted by BigFella at 1:46 PM