Lets start at the bottom. Since my Dungeon Kit idea is kind of an intro adventure, I figured I'd include one of the basics as the sort of substrate of monsters in the compact adventures I'm keying up. 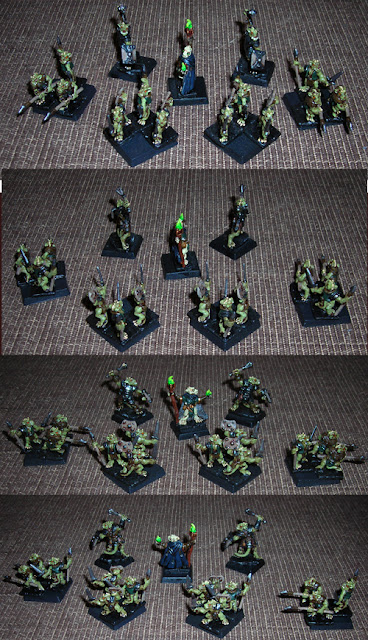 I did a couple things a little differently with these little guys. Firstly, I made 'em green, just 'cos why not? (They kinda remind me of miniature (miniature miniature?) versions of the classic green, pig faced orcs from the 80's D&D cartoon.)

Honestly, your bog standard Warhammer/Warcraft tinged greenies kinda bore me, so if I'm using orcs and goblins at all (which I tend to prefer not to, again 'cos they're so overused) I tend to paint 'em in different shades than green. Kobolds have a much wider range of interpretation, from rat like scaly dog twerps to stunted little cousins thrice removed to dragons. So I figured for once I'd go green.

Secondly, since I like using minis in play, I decided to base them in groups, to spare myself wrangling a million little individual figs on the tabletop. Since these guys are half a HD to begin with and prefer to attack in droves, it seemed like a logical choice. We'll see how it goes in game.

Due to forgetting that I already owned a pack of Reaper's "Kobold Leaders" I got a nice brace of "big" bodyguards for my kobold sorcerer boss, plus a spare sorcerer in the bits box for undetermined future use.

Moving up the totem pole of dungeon goons, and also 'cos I wanted to work on something non-dinky, we've got some big bruisers.
Ogres are kinda the intro to man-like monsters that the party needs to use pack tactics on to take down. I've got a few of Warhammer's pretty awesome ogre figs for that purpose, but this guy's part of my recent post-holiday Reaper wave. The ettin's from a couple of years ago, and saw his debut on the table at a seafaring Thousand Year Sandglass game I ran at Helgacon 9. (In a tribute to the classic Popeye cartoon he was backing up an evil pirate captain who also had a giant pet vulture.) Finally, the very Peter Jackson-esque troll who I got as heavy support for a villian that I wound up using other goons for. I think if I was gonna stat him up for Labyrinth Lord he'd either be an armored up hill giant or a runty stone giant.