Whoo hoo! I've officially made more posts than I did in the entire year of 2015!

Sometimes I pick up mini's, especially lovely cheap Reaper Bones, 'cos they're interesting. That's pretty much what happened with all of today's offerings.

First off, a trio of Egyptian deities, or demigods, or whatever you might want to call 'em. Maybe they're animated idols, maybe they're summoned godly avatars, or maybe they're ancient astronauts stopping off for snacks and a chance to use the restroom. Either way they were cool and I collected 'em all like Von Daniken's Pokemons.

Then another sweet translucent, this one in purple. Some kinda spell summoned attack beast or supernatural construct. He only needed some light surface treatment and some highlighting on the teeth and claws, otherwise the translucent plastic provides most of the wow factor. Watch out for this guy if you're gonna wander the foggy moors around your ancestral manor at night. 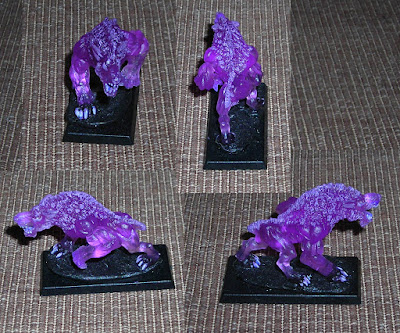