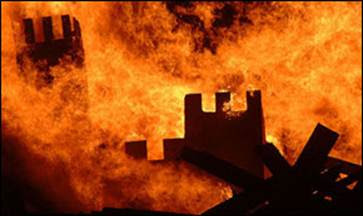 Casualties: Vlad’s wings seared off by blowback from fireball in an enclosed space. The upper levels of Cardille Keep are now ablaze.

Today's conflagration is the result of a DM's best laid plans going awry behind the scenes without the players being any the wiser.

See, the insane banshees they encountered, Fireballed, and then finished off in flames in this session were the ghosts of 10 ladies whose spirits had been imprisoned long ago by the vampire Lobovich.

In the original encounter, as written for the initial Creepy Crawl event, the players would enter the conservatory and find 10 skeletons in fancy dresses seated around a jewel encrusted balalaika. They hear ghostly whispers of "Free Us". My intent had been that they smash the balalaika, freeing the ghosts, who appear as wistful apparitions and bestow a Bless spell on the party.

Of course I held those cards way too close to the vest, so to speak, so what actually happened was they ignored or just didn't hear the ghostly whisperings, took the balalaika (although I admit I was glad that they valued it for its aesthetics instead of just another hunk of gp./xp. to jot down on their record sheet), then came back and took the skeletons too.

So you've got ten ghosts who've been robbed of their only way out of their imprisonment and stuck for good in a deserted tower, and then had their mortal remains animated without their consent and marched off as an undead hordelet.

Of course they'd be more than a little pissed off and crazy. So they became a pack of angry, screamin' banshees and then got blowed up by the same bunch of scoundrels who'd left them in the lurch in the first place.

Well, not the most delicate of endings, but that's the way the balalaika breaks, I guess. Ah well. They shoulda listened to their mommas when they told 'em to stay away from bloodsucking noblemen in creepy keeps.

Apparently somewhere in there the aforementioned scoundrels finished Granny Maw off too. Details are vague in this email. Even though there's a (?) in that last tally it wound up being more of a (.). The old gal was donesville, as far as this campaign was concerned. Not that Vlad was doing much better with his wings clipped.