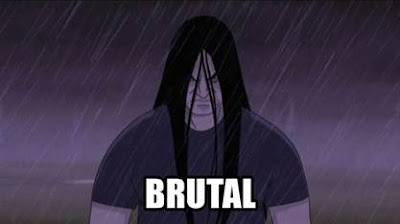 Events: Feeling beaten up with Cardille Keep merrily burning in the background, the party wandered over to the hunting lodge to maybe rest for the night.

Opening the door they narrowly avoided a spiked log trap and got to work beating up on the contingent of trolls and b-bears (yo) who made up the garrison. After murderating the monsters and chucking their bodies down the shaft in the pantry, they bedded down for the night.

During Tysis’ watch (I think) a huge knock came to the door, and found a fearsome frost giant, inquiring after Granny Maw. He was indifferent to the party’s answers, and strolled up to the keep and blew out the fire with a blast of arctic breath, then came back and asked his hill giant companions if any of them were hungry. When one answered yes the party fled for the shaft in the pantry while the giants each took a side and hoisted the hut off of its foundations. The group cowered in the catacomb hallway as the giants dropped boulders on the pile of bugbear and troll corpses then got bored and went away.

Again, a less terse email doesn't leave me too much to comment on.

I always think a game hits a whole new level when you've got giants in the mix, as I consider them the apex of the humanoid goon hierarchy. (Kobolds being the short end of that particular stick.) Not that the group was really ready to take a frost giant on toe to toe.

I styled the big frosty goon as essentially an 18 foot tall Norwegian death metal guy. I would have been fun to have had more interactions, but in this case for the party discretion was probably the better part of valor. You roll with the chances you miss and tuck 'em into your deck for later.

Anyway, stay tuned for next week, when I'll be bringing you a conclusion (not so much a finale) and an announcement.
Posted by BigFella at 8:17 AM