So, continuing my most lamentable belaborment of Helgacon III, the next event I had the pleasure of taking part in was Delta's "Book of War" game. He's blogged about it here, and should be regarded as the authoritative account on the event.

My own capsule version of events: this was a tabletop battle game created by Delta to scale seamlessly with Original Whitebox D&D, so that large scale battles could be fought without having to bend an OD&D campaign too far out of shape. Units were bought on point value, and each mini represented 10 guys of a variety of force types.

The event was run in tournament style, with stepped brackets, which worked really well for Saturday morning, since I was still dragging from this dang cold or whatever, and everybody else had stayed up 'til 4:00 AM or somesuch. Only Allister and I were available to start, as other participants were still asleep, so we fought for the first bracket.

Terrain was determined with dice rolls, and we took turns placing. Here's what we came up with. 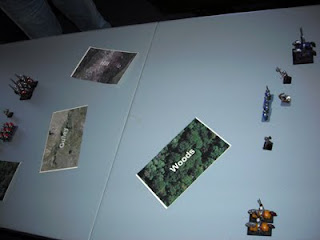 For my army, I picked a bunch of pike men, a unit of longbowmen, a unit of medium infantry, a unit of light infantry, two guys worth of medium cavalry, and a pair of horse mounted archers (who are represented by the yellow fellows down at the bottom). Allister picked heavy cav, longbows, massed pikers, and heavy infantry 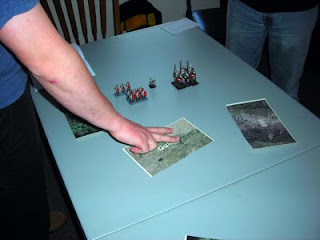 My general strategy was shielding my archery unit with a row of pikers, with my two infantry units ready to help them out. I put my light infantry in the woods since they were the most mobile and able to overcome the woods' penalties to movement. The real stars of my show, however, were my horse archers. They galloped around the field peppering the enemy units with unanswerable bow fire. The main body of Allister's force got snagged on my pike row and caught in a crossfire, and in the end it was a rout. I'd made it to the finals. 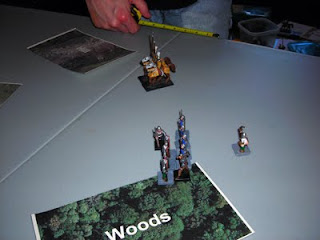 The next game was a competition between Max and Jon for the fourth initial slot, since the two sleepyheads had by now gotten up. (College kids...) The winner would take on John for the other seat in the finals. Meanwhile, I crashed on the couch and rested to draw up my strength for the finals and for my afternoon Labyrinth Lord game. Apparently, their terrain rolls yeilded a lot of rocky terrain, like they were fighting in the Alps. 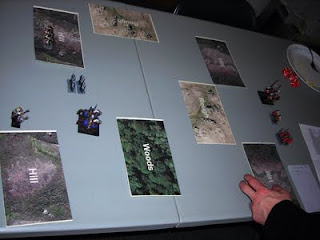 Jon emerged the winner, a first victory for the cavalry commander who'd come to be known as the Iron Duke. His next game was with John, on much soggier ground. 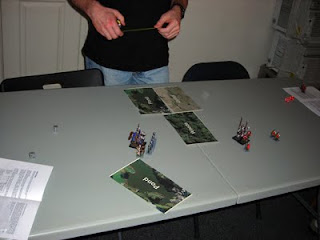 Once again, the Iron Duke won the day, persevering through the battle with an uncanny knack for surviving.

Then it came down to the finals. It was the Iron Duke, vs. The Khan, as I decided to name the leader of my forces since mounted archery played such a role in my victory.

We were given double points to stat up an army, so I bulked up all my forces, and added a unit of heavy crossbows to the mix. 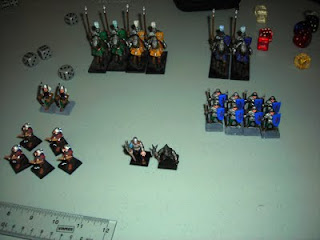 Terrain rolls had given us a very interesting feature, a river, which I decided to use to make a difficult to assail enclave on my end of the table. 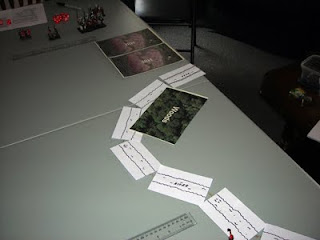 I set up my pikes and archery in the enclave, and started my horse archers running along the bank of the river, as Jon advanced the Iron Duke and his heavies toward me. 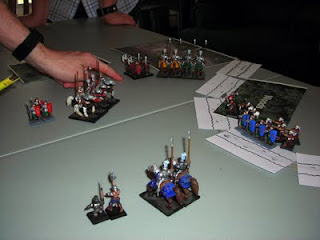 He took the daring option of fording the river into my pikemen after my horse archers had shot past and snagged on the hills at the end of the river, trying to avoid getting tangled with his heavy infantry. My medium cavalry fell in behind to harry the Duke's rear guard, but the irascible bastard survived. 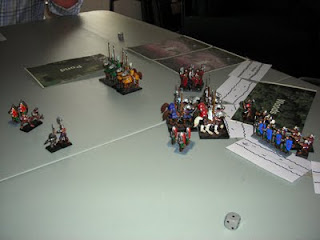 Eventually, the Duke smashed my pikers and set my crossbowmen and longbows running, while my horse archers polished off his archery units. Eventually, the Khan's horse archers got turned around, and all my surviving ranged units tried to catch the Iron Duke in a crossfire. 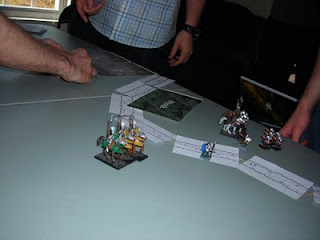 But STILL the bastard refused to go down. He routed the rest of my shooters, while I desperately tried to pepper him with bow fire from across the river. 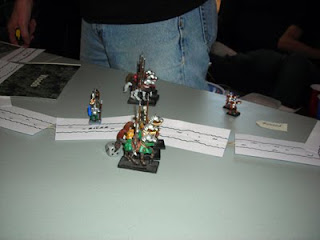 Eventually, the Duke finished stomping a mudhole in my crossbowmen and crossed the river after my horse archers. From there it became a desperate chase. 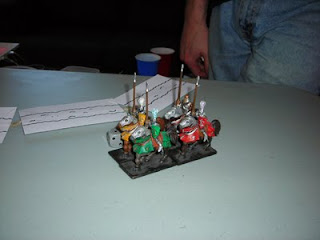 I tried to put distance between us and wheel around, but he kept surviving and catching up, whittling down the Khan's riders until there were just 20. Finally, running out of strength (both literally and figuratively.) the Khan turned at bay against his foe. 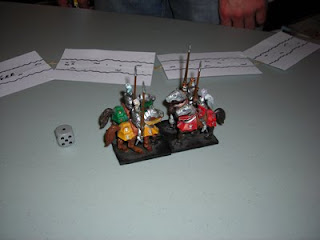 And was cut down by the Iron Duke. Jon had won the tournament, and the wily Khan was defeated, shaking his tiny virtual fist at the heavens and bellowing in rage. 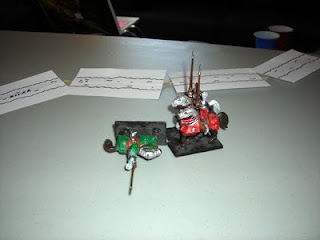 So anyway, this was a hoot. The game was fun and easy to learn, the tactics were engaging, and the timing and the interval of play suited my physical and mental state at the time. I find it interesting that the initial innings of this year's Helgacon saw an uptick in tabletop strategy games, which I think is cool. I think horse archers were a pretty formidable tool, as the Mongols proved long ago when they swept across Eastern Europe and West Asia. I had some trouble overshooting with my guys, but by and large the mobility really paid off for dealing damage.

Thanks for a great session, Delta. I'd play this again, maybe see how you mix fantasy elements in.
Posted by BigFella at 6:16 PM