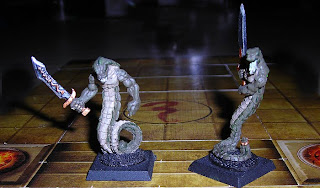 Lurking beneath the streets of the low quarters of many cities of Sanduk Ramul, the dark cult of Al Hayyat, the great serpent, flourishes in hidden places. Great is their wealth and subtle are their ways, and when the priests of the winding way seek to safeguard their troves of forbidden knowledge and ill gained treasures, they often turn to the fearsome serpent ogres.

These tireless monsters require little sleep or food, laying torpid but ever watchful, until unwary intruders enter their premises, where they then stir to relentless, deliberate life, slaying and devouring without compunction or malice.

It is whispered among sages that the terrible ritual for creating these creatures begins by allowing an enslaved ogre to be half devoured by a great python, before both are struck by a spell of transformation, becoming a chimerical beast with the head and coils of a great serpent and the arms and hands of a mighty thewed ogre, which towers well over the heads of even the tallest of men when reared up to their full height.

Serpent ogres may bite with their fanged maws, or strike with weapons given them by their masters. If a hapless foe is caught in their coils, they may constrict them from round to round, releasing them only when all life has been squeezed out of them. The gear and garments of those they slay are usually scattered about the monsters' lair, while the bodies are swallowed whole, to be slowly digested over several months. A victim of a serpent ogre my be recovered more or less intact within 1d4 months.

Due to their unnatural nature, a serpent ogre may be turned as if they were an undead of their level, but otherwise they are living creatures, albeit terrible ones, and may fall victim to sleep, charm, and paralysis as normal. They will instantly obey a cleric of the cult of Hayyat without question, although their minds are very dull and literal, and often the justice of other gods finds these evil priests when a serpent ogre interprets an order much too literally. 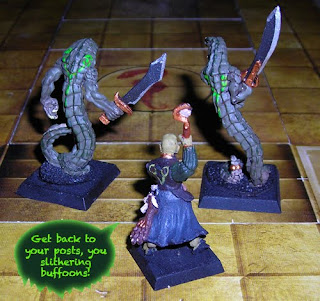