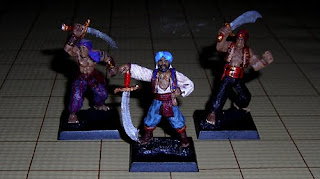 "Ho HO! Am I not GLORIOUS ?!"
Here is one of the first "race replacements" for the Thousand Year Sandglass. One of the beauties of Oldskool Moldvay-Cook, BX Labyrinth Lord yada yada style race as class is the ease with which you can swap out these race as classes to change the character and tone of your campaign world. For this setting, having Tolkeinian elves, dwarves, and halvlings running around an Arabian Nights style desert setting just doesn't work. (That's not to say it can't work ever, but fer my purposes, nah...) So here is my replacement for the Elves, the Jann.

Among the tribes and nations of mankind, there are those in whose veins flow the magical blood of the jinni. These individuals are known among men as the jann. They are gifted with both skill at arms, as well as the power to cast spells as wizards do. Many jann are indistinguishable from humanity, albeit with a greater tendency towards comeliness, but just as many bear outward signs of their lineage, such as unusually colored eyes or hair, or greatly increased height. Regardless of their physical appearance, they are invariably strong, commanding personalities capable of great passions. Many find them arrogant, high handed, and boastful, but often their boasts have considerable power backing them up. The life of a jann is one fraught with destiny and adventure.

Jann may wield any weapon and use any armor, and may cast spells from a list they share with the Sha'ir, using the Magic User's spell progression chart for the number of spells they may cast per day. They do not need to choose spells in advance, instead picking spells from among the spells they know for an appropriate slot on the fly.

They must have at least a 13 on both prime requisites to get a +5% bonus to their XP, and must have a 16 in CHA and a 13 in STR to get the +10% bonus. Due to their magical nature, they can spot illusions on a 1-2 on a d6 when actively searching. Also due to their lineage, they are immune to the paralysing touch of ghuls. Jann can speak common, their alignment language, gnoll, kedai, and the language of the jinni.

Reaching 9th. Level: When a jann reaches this level, they may choose to either build a fixed stronghold in the traditional fashion, generally at an isolated oasis or mountain top, or found a nomadic camp that they rule over as a shaykh, claiming a number of hexes equal to the shaykh's level in the desert. The camp moves from hex to hex every 1d3 months, with a 1d6 to randomize the direction it heads within its ruler's territory. While the hexes in a sheikh's domain remain wild in terms of clearing out monsters and other perils, the hex the camp is currently residing in must be free of threats, and a force must be sent to clear out a hex to be occupied in the future. Warriors of all kinds may be hired, but a personal honor guard of jann stock must be retained.

Jann use the Elf Level Progression and Saving Throws from the Labyrinth Lord Rulebook.

The entirety of this class is hereby designated as Open Game Content via the Open Game License.
Posted by BigFella at 7:44 AM