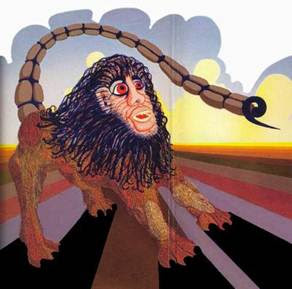 1 Wish has been used, with Rael acquiring a huge, half frozen wolf heart which she promptly ate.

You acquired a small steel amulet with a symbol of a skull with a curled snake’s tail on it from the dead manticore.

In this session the players made their way back to Strangeldorf, but got side tracked quite a bit.

Morgus the Malevolent sent another monstrous collection agent to wring the long spent cash from Count Gore De Vol's crypt out of them, and yet again they torched it in pretty short order.

They somehow realized (I don't recall how, perhaps DM prompting.) that the rosebud ring was actually a Ring of Wishes, and used one of them up on Rael's desire to have better control over her werewolfly transformations. It's not often a Wish conjures a colossal chilled canine coronary muscle out of thin air and this is seen as a good thing. Or is it?

Finally they took a side trip to Lake Moguera to check up on a treasure map they'd acquired that claimed to point to a large treasure beneath the murky waters. An excursion sub-party waded into the lake and discovered a sunken keep guarded by a gigantic sturgeon, which they fought and defeated.

And that's where this session wrapped up.

Tune in Friday for some sturm and drang.