Henching: Mr. Exeunt, a Lvl 8 Homanculus whose torso has been grafted centaur-style on the body of a gorilla.

Monsters being managed… maybe?
A double ended bulette, now currently under the effects of a permanent Speed potion.
Good luck with that on Monday.

Back at Von Himmel Manor the party was asked to descend into the basement lab levels once more to help corral a specimen that had gotten loose from its big glass tube. I'm afraid I'm not 100% certain what Von Himmel's proteanoid was, 'cos I can't find reference to it in my notes. I probably just went with a flesh golem or some kind of ooze. Maybe a dopplelganger. Or maybe a flesh golem crossed with an ooze or a doppelganger. I dunno. Anything was possible in Doctor Von Himmel's laboratory.

While that was being dealt with, with the help of Von Himmel's lab level doorman Mr. Exeunt, the good Doctor's rival Baron Ünterlöb sent another one of his custom built bulettes to attack the very heart of Von Himmel's operations, and this one was equipped with jaws on both ends like a pushmi-pullyu gone even more horribly awry. 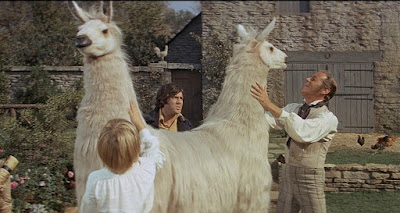 They fought the beast in Von Himmel's potion mixing room, attempting to use the mixing apparatus to wage some magical/chemical warfare on the burrowing monstrosity. Alas, when you mess with devices and especially potions you don't understand, you usually wind up making things worse, like giving a double headed bulette a permanent Speed upgrade.

And it was here that we wrapped up, with the next session coming preternaturally fast on the party's heels.

See you on Monday.

Bonus:
Here are the stats for Von Himmel's loaner ape bodies, that the party's homanculi were forced to pilot around as disembodied brains in jars for many of the prior sessions goofing around a mad scientist's mansion:

Loaner Apes: HD: 4, AC: 6, Atk: 1d4/1d4, use character’s attack rolls -2, Saves: Breath Wpn: 15 Poison: 12 Petrify: 14, Wands, Spells as character. Mv: 120(40) On a natural 1 in combat or natural 20 on an attribute check, roll save vs. Wands or the brain jar pops loose, requiring a round to reattach. Brain jar is AC 4, and takes 10 pts of damage to shatter. In that event roll save vs. Death to see if the brain survives long enough to be transferred into another receptacle, preferably one filled with a sterile solution of healing chemicals laced with painkillers. Handle with care.