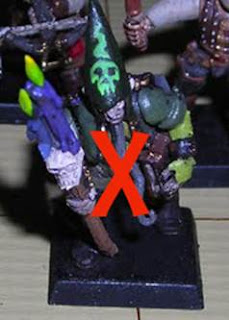 Morgus’ Manticores – Chopped, zapped, shot in the tail resulting in a perforated cranium, winged with an arrow, brought down over Lake Moguera
1960 EXP/6.5 players = 301 apiece

TOTAL EXP: 826 EXP apiece
Remember. If your character hunched, they get ½ that amount.

After the last session's calamitous sundering of the party, the players turned everything around with the marvelous power of their one remaining Wish spell from the rose decorated ring. After considering the best wording for what they wanted, they decided to wish that the party, at full health and spells and totally unpetrified, as well as their long distance antagonist Morgus the Malevolent, were all together on the shores of Lake Moguera. (Serves me right for granting wishes to a player group composed of 90% computer programmers.)

With a sparkle of magic and a canned harp sound effect the party appeared in full fighting trim along with Morgus, who barely had time to summon a couple of manticore minions to his aid before the party dropped him like a mis-flipped pancake and ended his threat once and for all. (Actually, I later laid some groundwork for his return, but the campaign ended before I could act on it.)

The battle with the manticores was brief and decisive. The tail shot/head strike was a particularly heinous natural 20, I believe.

Having spent their wishes and wasted their enemies, the party scrummed up and went back under the lake, this time in a full group, to plunder the sunken ruins. They got down the submerged stairs and battled the bone golem guarding a coffer full of treasure before the session ended.