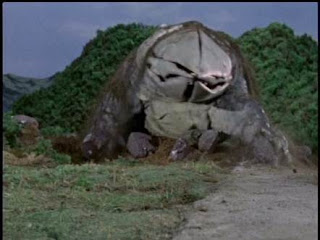 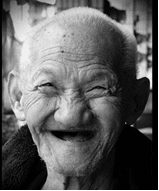 On the journey back to Von Himmel Manor, the players were confronted with the sight of a scrawny little old man clad in a nightshirt and furry hat, pelting furiously toward them up the trail with something huge and horrible burrowing hot on his heels.

As the sprightly senior citizen rushed past them, giggling madly to himself, the party were suddenly thrust into battle with a bulette that burst up from the road and attacked.

After defeating the creature with a measure of difficulty interspersed with a couple natural 20's, by the look of it, they headed on toward the mansion. The old man didn't speak beyond gleeful cackling and rude gestures, but they allowed him to follow them as they continued on their way.

They were met at the edge of the estate by Alexi Von Himmel, who introduced them to his Great Uncle Nukus. Mad as a bucket of beetles, but also a 20th. Level Fighter, Uncle Nukus liked nothing better than to seek out the biggest, scariest monsters infesting the woods and mountainsides and getting them to chase him.

The aggro he'd pulled when he'd met up with the party was the product of one of Dieter Von Himmel's rivals in the mad science biz, one Baron Ünterlöb. Whether this was a random encounter, or the beginning of a new subterranian assault, was yet to be seen.

Tune in Friday to see...

Note: The picture above is the monster Gabora from episode 9 of the original Ultraman TV series. I am firmly convinced that it was the original model for the little plastic toy monster that Gygax & co. turned into the bulette back in the early days of AD&D.

Jeff Rients covered the history of this monster pretty well in his classic 2005 article on the subject. Look at the picture he's got of the first bulette, look at Gabora up there, and tell me I'm wrong.