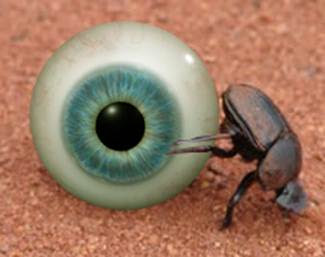 Loot Gained: 1000 GP payment to Greed & Ritzy for Spider Wolf Poison glands from Professor Scarabus (Vlad was present also. I leave it up to you as to how it’s split)
333 EXP to Greed, Vlad, and Ritzy

Contacts made: Professor Scarabus has asked Greed & Ritzy to drop off a violin case (that occasionally makes ominous scratching noises from inside) to the music conservatory of a nobleman and composer named Philippe Von Zann. 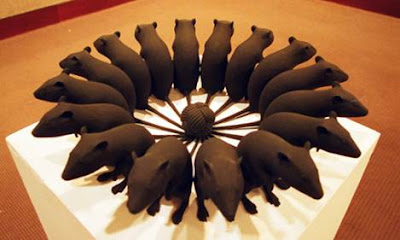 After an initial mugging, Rael charmed the were-rats of Kroenenberg’s undercity into taking you to their leader, the horrible Rat King, to discuss enhanced lycanthropy techniques with Rizzo, its medically knowledgable head. His recommendation: seek out Isingrim the Werewolf King, or one of his sons, and eat his heart. He is reputed to lair in the high alps far north of Strangledorf.

So the party finally made it into town and secured lodgings at an inn, then set about pursuing their various agendas or discovering new ones.

Greed, Ritzy, and Vlad headed to the address given to them by the monkey skeleton and were met there by a scarab beetle rolling a disembodied eyeball, which led them to an abandoned chest of drawers/vanity in a seedy back alley. The grim visage of Professor Scarabus appeared in the mirror, and instructed them to place the poison glands of the spider wolf in the top drawer. As soon as they'd done so the middle drawer popped open, revealing their payment of 1000 gp.

While they scooped their money into sacks, the Professor asked them if they'd be interesting in doing some delivery work for him. Judging him to be a trustworthy, benevolent soul, they agreed, and the bottom drawer popped open, revealing the violin case to be delivered to Philippe Von Zaan, for the price of 800 gp.

Later, Vlad, Rael, and Tarvenir went out on a little information gathering jaunt, leaving the homanculi back at the inn to avoid drawing any unwanted ire from the torch and pitchfork set.

After visiting a couple of the local religious orders, most notably the Order of St. Hieronymous (an organization of monster hunters. I don't rightly recall why they were inquiring there. Maybe it was werewolf related.) they got jumped and dragged into an alleyway by a gang of were-rats. Seems the lycanthropic rodents thought they had a bunch of neophyte monster hunters on their hands.

After some initial blows were struck, Rael revealed what she was also on the were- spectrum, and the rats quickly changed their tune and became friendly. They led the excursion group down into the sewers of Kroenenburg, where they met with the were-rat's leader, a hive mind of venerable were-rats conjoined by their tails. The horrible Rat King.

Rael was interested in finding out if she could transform at will and reliably, as opposed to once per day and back and possibly getting stuck in either form like she was now. The Rat King told her about the King of Werewolves, Isengrim, and how if she wanted to freely transform she'd need to eat his heart, or the heart of one of his close relatives.

How 'bout that for a plot hook?

Tune in on Wednesday as the networking continues.