Monsters Mashed:
Fog swimming bull shark who attacked Greed, Ritzy, & Arongoth in their room at the Rusty Bucket Inn. Bludgeoned to death and sold to the inn for soup stock to offset room repairs.
30 EXP/3 = 10 Exp for Arongoth, Ritzy, & Greed

50 gp worth of copper, silver, and brass scrap from sea chest in shrine. /5.5 players = 9 exp apiece

Addional gain: +1 cutlass with etched design of mermaid kissing a sailor under waves on the blade 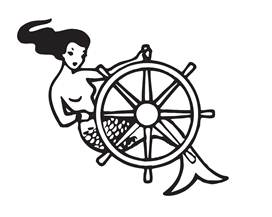 In this session the conflict with the Cult of Leviathan escalated, with the cult sending another of its signature monsters after them: enchanted bull sharks that could swim through thick fog, which they sent after our heroes at the inn.

I smile with fond nostalgia at the name of the inn, The Rusty Bucket, which is a call back to the second campaign I took part in with Paul and Delta and my Boston gaming crew. Somehow our group wound up buying a tavern and running it, in addition to fighting angry volcano gods, giant spiders, and midget vampires in a campaign set in the multi-doomed city of Treague.

But I digress. After fending off the shark that crashed through their window and selling the fins to the inn to pay off the repairs, they sought out the squid cult's home base to get them to call off their repo-fish.

I do recall some shenanigans with Rael trying to climb in wolf form onto the roof of the dilapidated dockside warehouse they tracked their foes to, but eventually they found the secret entrance and began their raid on the Shrine of the Leviathan.

They made their way down into the entry hall, and Fireballed a sea-troll that crawled up thru the sea portal, and that's where we left off for this session.

To prep the cult's temple I used a small dungeon/temple map I'd run across as a 1 Page Dungeon entry titled the Lost Temple of Tyrandraxu written by Mr. Joshua J. Laboskie, proprietor of Jasper's Rantings.But I needed to make it a bit more maritime in tone, so here's my modified key:

THE HIDDEN TEMPLE OF THE LEVIATHAN

The rickety steps lead down to a large 40’X50’ room with a thin pillar of barnacle encrusted stone every 10’.

There is a corridor in the N wall behind a rattling curtain of seashell beads strung with about 50 gp with holes punched in their centers. If any of the coins are gathered, it will cause enough rattling to alert other parts of the complex.

In a 10’ alcove to the E there is a prow of  a wrecked ship with a mermaid figurehead. The head has been struck off, replaced by a jagged bloom of bone white coral. A sea chest sits on a low stone slab in front of it, full of copper and silver pieces and smashed compasses and astrolabes. (about 50 gp worth of coinage) Beneath the coins is a cutlass +1 (1d6+1) that allows Water Breathing as long as it’s clenched in a user’s mouth. Its blade is etched with an image of a mermaid kissing a sailor under the waves. If the coins are disturbed, the coral head of the idol will start screaming like a shrieker for 1d4 rounds.

There is a locked door to the W. A puddle of wet sand streams out from under. It bears a hammered copper image of a whale and a squid locked in a death struggle.

This room is 30’X30’ with walls of grime streaked green marble. A low well lies in the center, about 10’ across. If the shrines in 1 or 5 are disturbed, underwater guardians will be summoned to defend the temple. Monsters will also be called by Brother Strangel in 3 at will.

The door to this chamber is ajar, and leads to a dank 20X20 room full of battered antique furniture and decorated with mildew spotted sea charts. A well stocked liquor cabinet sits in the E Corner. This is the dwelling of Argus Strangel, the priest and prophet of Leviathan.  A grizzled man of nautical bent with one wide, staring eye. He’s willing to negotiate sale of the hook.

A corridor leading to a 30’X20’ flooded room with ankle deep brackish water. There is a lot of sand in the otherwise roughly worked stone corridor, which will slow movement by 1/2 (4a). Under 4b there is a pit trap (1d6 dmg from fall)

There are rusted manacles set in the walls of the room, and this is where the party will be taken if defeated. The corridor ends with a water swollen door in 5, which takes a 1 on a d6 to open.

There are two pressure plates in the corridor for 2, which will activate Poison Dart traps (Fire as F1, 1d4 damage, Save vs. Poison or affected by hallucinogen as Confusion. for 1d6 turns (1-4 Fight Phantoms, 5-6 Babble, 7-10 Fight Each Other). Past the point where two corridors meet, the hallway is hung with fronds of half rotted kelp, which slows movement by 1/2 to pass thru, and save vs. Paralysis or get entangled, needing a turn to get loose.

The shrine beyond is 40’X20’, carved in black stone with a row of polished, salt crusted steel columns leading to an 8’ wide porthole opening onto a vast dark underwater vista with vaguely perceptable shapes moving in the distant shadows. If touched ripples will flow across the wet surface.

Passing things through the portal has a 1 in 20 chance of attracting the attention of one of the creatures. Stepping through will put you at the bottom of the ocean, save vs. Paralysis or pass out from the immense sudden pressure. A giant squid will attack a moment later.