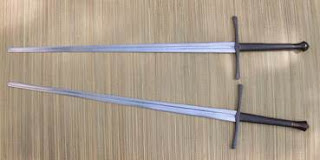 Two +1 Longswords engraved with intricate scrollwork, one inscribed with the word “enlightenment” and the other with the word “enterprise”.
1 Pair of black silk boots with embroidered blue & white clouds and steel discs embedded in the soles.
1 Scroll of Warding Lycanthropes

In this session the party knocked over the concierge station by the entryway of the Lamented Redoubt of the Occluded College, and thoroughly looted it, even taking the hooded skeleton who sat in the chair behind the sign in book. Demonstrating that player characters would steal dirt if they could wring gold or XP out of it.