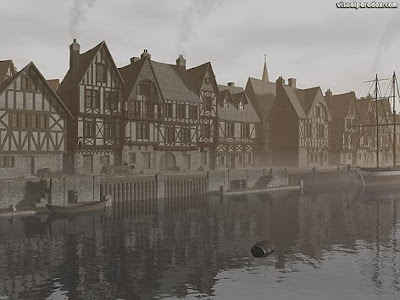 Monsters mashed:
Morgus The Malevolent’s Money Mummy – Kerploded by a Lightning bolt from Tarvinir.
962 EXP (Factoring in the two coins in its eyesockets)

The Skull Vulture – Also Kerploded by a Lightning Bolt from Tarvinir

This session was spent on the outskirts of the port city of Kroenenberg, battling an assortment of undead horrors.

Morgus the Malevolent's money mummy initiated its shakedown of the party by coughing up a vial of vile green powder that caused Arongoth's entourage of shambling corpses and skeletons to turn on him and his living companions. Whut oh!

Thus they were forced to smack 'em down, but it was better that way, since they were new arrivals in town and the welcome wagon generally brings torches and pitchforks (or in this case, probably gaff hooks and belaying pins) when you've got a gaggle of zombies and skellies following you around.

They also encountered a monstrous vulture with a human-ish skull for a head. I'm pretty sure I just reskinned a standard harpy for that bit. I think the creature was terminated at a distance. I also think I had rough plans for a dungeon connected to it but the party was intent on getting to their destination and didn't follow up on it. Such is the way. That's why it pays to play it loose.

I love doing re-skins on monsters, and had a lot of opportunity to do it in this campaign. Just like when I was a kid my action figures never really stayed as who they were on the package they came in. I was always coming up with my own characters and making up my own stories, even as a wee tad.

(Except for Han Solo and Chewy, although they flew around with Hammerhead, Walrus Face, Snaggletooth, and even Greedo (Dunno if he forgave Han first or what.) as kind of an ersatz pirate crew in the back compartment of my Millenium Falcon vs. Darth Vader and his one solitary stormtrooper. (Who kinda became like Professor Fate and Max, thinking back on my youthful frolics on the living room floor.) But I digress...)

By my use of the term "kerploded" in the email, I can infer that in both cases it was a one shot kill from Tarvinir's lightning bolts. I'm sure in one of those he used the Big Red d30. Like I've mused before, getting to roll a d30 for damage might be a bit overpowered, but the players enjoy it. As Jeff Rients famously said "Your NPC's suck and they are all going to die."

Tune in next week as our heroes hit the town, and the town takes a couple swings right back at 'em.