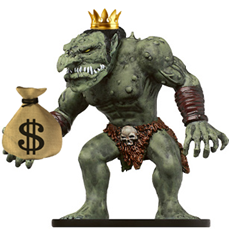 1 Troll – Successfully bribed to sit out combat and gnaw on fallen combatants, and then further bribed to obtain Mountainroot morels.
100 EXP

This session found our horrid heroes in pitched combat with a stinking tribe of troglodites with their claw/claw/bites. Things might have gone very south for the group, especially when the trog alpha sent an emissary off with a throat sac full of gold to call on the mercenary assistance of the trio of trolls living deeper in the caves.

Thankfully, Vlad somehow tweaked to what was going down and made a counter offer to the troll when it showed up, buying it off before it could pull any of his friends' arms out of their sockets. With their erstwhile ally happily munching on the wrecked corpse of Fritzy the musclebound rat zombie and watching the party slitting them up a treat, the trogs cut bait and retreated into the depths of their cave.

With a bit more negotiation and some more gold crossing its warty, rubbery palm, the troll happily lumbered off into the fungus caverns and came back with the morels of the story. 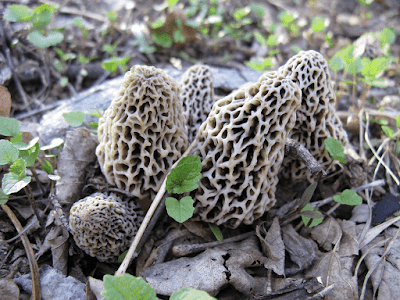 Their mission accomplished, our merry mob of morel midgets hied themselves back to Strangeldorf.

Stay tuned for morel next week.
Posted by BigFella at 7:47 AM