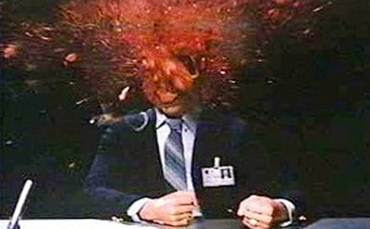 Gather 'round, boils and ghouls, and let me tell you a tale of a mandrake harvesting gone awry.

So the plan the group cooked up was for Vlad to cast Levitate to get up to the high cliff where their prize awaited while Arongoth cast Silence 15' Radius on him to ward off the sonic doom it contained.

So they do, and up Vlad floats, about 50' up the cliff face, while the party all stands around below watching him.

Vlad pulls the root in question out of the dirt on the high cliff ledge and it starts screaming, but it's fine 'cos in the 15' sphere of silence nobody can hear it.

Except the thing is shaking and vibrating like crazy in Vlad's hand. So I make him roll a Dex check, which he fails. So he loses his grip and drops the silently screaming mandrake.

Well, the party stares up in horror for a second while it falls in cinematic slow motion, then they scatter, running for their lives as the terrible tuber drops out of the 15' spell radius and here comes the scream.

I make everybody roll saves vs. Death, I think, and mercifully they all make it except for poor, henchy Richard Darkmagic, who takes full damage, which puts him past 0 HP so I roll on these dreadful dismemberment tables that I'd gotten from Paul a while ago to use with a critical hits system he pioneered that I've adopted. (Ironically to make the game less lethal. Heh.)

The same tables that Paul used in his Restenford campaign, that had a non-trivial percentage of the party limping around with missing limbs and delving dungeons looking for ways to re-grow them or build magical prosthetics.

Based on my records and looking at the charts again, that means a 94-96 was rolled on the d100 for Location, which is Face, followed by a 6 on the d6 Severity, which equates to Severed, which all adds up to X = Instant death.

And that's how the very late Richard Darkmagic wound up getting his face exploded by a screaming mandrake.

Tune in next week for more screemy shenanigans.
Posted by BigFella at 8:05 AM