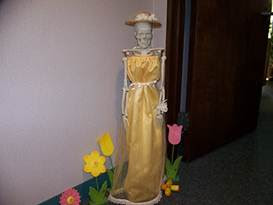 Also acquired: 10 skeleton ladies in fancy dresses and a healthy fear of trolls, based on Alexi Von Himmels’ stories about his very late Uncle Stanislaus.

So after parting company with the Von Himmels, the party hied back to Ghoulardia Pass to do one last sweep through Cardille Keep.

Since he was back up to 5th. level and able to cast Animate Dead again, Arongoth animated the skeletons in their fancy finery that were lounging around in the late Lobovich's conservatory. I guess he just wasn't comfortable unless he had an entourage of shambling undead following him around...

They made it up to the top turret, now that the fires had gone out, and cracked open the giant cauldron that had been hanging there. Inside, they found Lobovich's treasure, a hefty pile of gold and silver.

It was a good start, but they were itching to increase their cash flow, so they decided it was time to leave Strangeldorf (this time without a torch & pitchfork waving mob behind them) and head out for the big city of Kroenenburg, where they could sell the bigger ticket gemstones and maybe make some more moolah as they went. Or at least attract a better class of mob to run them out of town.

Tune in Friday as our merry miscreants make their preparations and set out on their journey.