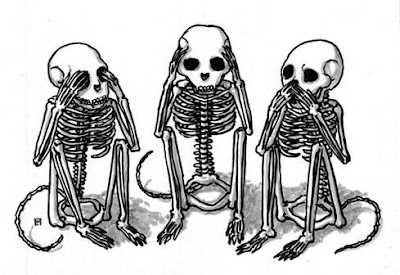 Monsters mashed:
Werewolf: Stabbed and bludgeoned, then finished off with a bisected skull from Greed
190 EXP 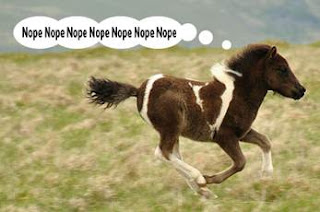 Tune in next week when Morgus’ Money Mummy says: 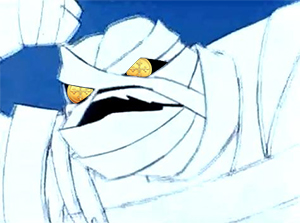 Creepy crawl correction:
Sorry. It was Vlad who split the werewolf’s head in half with his dagger, wasn’t it?
My apologies. 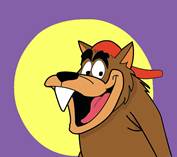 Whoo. A lot of threads laid down and picked up in this session.

The party completed their exploration of the Spider Wolf's lair, encountering the moonstone boulder in the deepest part of the webbed up forest that caused Rael to involuntarily wolf out and rampage. They put her to sleep B.A. Baracus style and fought one of the enshrouded werewolves in the multi-legged monster's larder.

I think they put both the couriers out of their misery, rather than go thru the trouble of gathering all those herbs and dire wolf blood and whatnot for a cure. They saved at least 2 silver pieces, plus not having them around to contest where they might have gotten the paperwork and signet ring that gave them the title of Cardille Keep was probably a factor.

Gerald the pony finally had enough of all the terrifying goings on and fled the scene at top speed, dragging Vlad behind him part of the way. Vlad managed to get loose but Gerald got looser, and vanished over the horizon.

One thing I know from growing up around horses is that these huge animals can spook at the sight of a fluttering gum wrapper. With all the werewolves and giant spiders and death and decay going on around him I'm honestly surprised Gerald's head didn't explode.

As they finished up and were picking their way out of the horrible webby woodland, they were met on the path by an animated monkey skeleton carrying a brass trumpet that magically played a message from one Professor Scarabus, a secretive wizard based in Kroenenburg, who offered them a princely sum of money to collect and deliver the lycanthropy tainted poison glands from the spider wolf to an address in town.

So they obligingly went back and sawed the head off the dead kruzeschlusselwulf and bagged it up. There's no way a fast acting toxin that turns people into werewolves could be used for anything but peaceful and socially edifying purposes. No way!

Professor Scarabus was a villain I introduced in the original round robin Wardicon campaign that I participated in back in those distant days when I first started gaming with my coworkers at Genetic Anomalies, which included such luminaries as Paul and Delta.

My character at the time was a square jawed, superhero styled paladin named Calvert McCallister, and Scarabus was created as a super villainous counterpart.

The Professor was always running city wide schemes of horrible, Dr. Phibes style revenge on his former wizardly colleagues or cartoonish mass destruction, like the one time he turned the entire population of Wardicon to stone, or that other time where he tried afflicting the whole city with mummy rot by spreading powdered mummy from a hot air balloon.

Thankfully, he was foiled time after time, but he was a real rum customer.

In the Creepy Crawl his methodology and style were very much cribbed, aesthetically, from the work of Jan Svankmajer. They never met him in person, which seems to be the only way you can preserve a villain in an RPG campaign. Although even that's no guarantee...

And speaking of remote villains, this session ended at a bit of a cliffhanger a few miles outside of the Kroenenburg city limits, as a hulking mummy with gold coins for eyes blocked their path. Seems the evil sorcerer and rival tomb looter Morgus the Malevolent had figured out who'd stolen Count Gore De Vol's treasure out from under his nose and had begun sending supernatural collection agents after our ghoulish group, furious that they'd stolen the treasure that he'd intended to steal.

Tune in on Friday to see how that particular pecuniary pickle wraps up.
Posted by BigFella at 11:01 AM