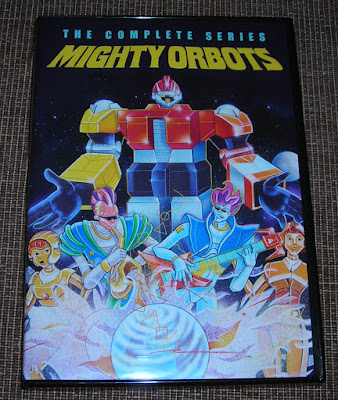 Back in 1984 ABC's Saturday Morning lineup was graced with one of the best cartoons ever made. It only lasted for one season, before a baseless lawsuit from Tonka claiming infringement on their "Go Bots" line took it off the air.


But while it was still on, back when I was a tender lad of 12 summers, I taped every single episode on our early model VHS recorder. (So early that its remote was attached to the unit via a wire.) I treasured that tape for years, until the inevitable breakdown of the magnetic media forced me to discard it. After that, I had to content myself with crappy bootlegs obtained at conventions, usually digitized from other fans' decaying VHS tapes.

Finally, Warner Bros. has put the entire series out as a Manufacture on Demand release. I've been waiting for this since they invented DVDs.

It's as gorgeous as I remember it, with top notch voice talent like Don Messick and Gary Owens, high quality character design and animation from assorted Tezuka productions alumni, and the jazziest soundtrack since Jonny Quest. If you remember this show, or don't but can appreciate vintage TV animation at its finest, then check it out. You can find it on Amazon or wherever fine DVD's are sold.