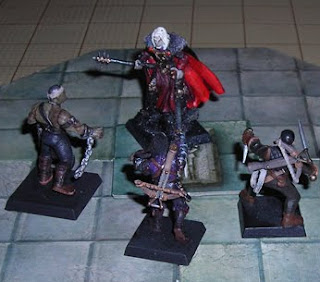 Casualties:
Arongoth is now lvl 3, thanks to level drain from the vampire.

Good wrap up for the year, folks. See you around the table in 2014.

So the party went in thru the catacombs to the deepest sub basement of Cardille Keep and hit Lobovich where he sleeps, in a dungeon tomb guarded by four Doom Guards, which are essentially skeletons encased in rusty plate mail packed with grave dirt.

This session was a mixed bag for the party, as you can see. While they brought out the big guns and laid a serious whuppin' on Lobovich, and released a captive gypsy maiden who bestowed some good luck kisses on the lot of them, Arongoth suffered a loss of two whole levels to the vampire's draining touch. Our crafty cleric's efforts to regain his stolen vigor will set him on a very bizarre path indeed, as you shall see, dear reader.

Also, while they put a pretty serious crimp in their fearsome foe's un-lifestyle, they weren't quite as thorough as they needed to be to put him out of commission for good.